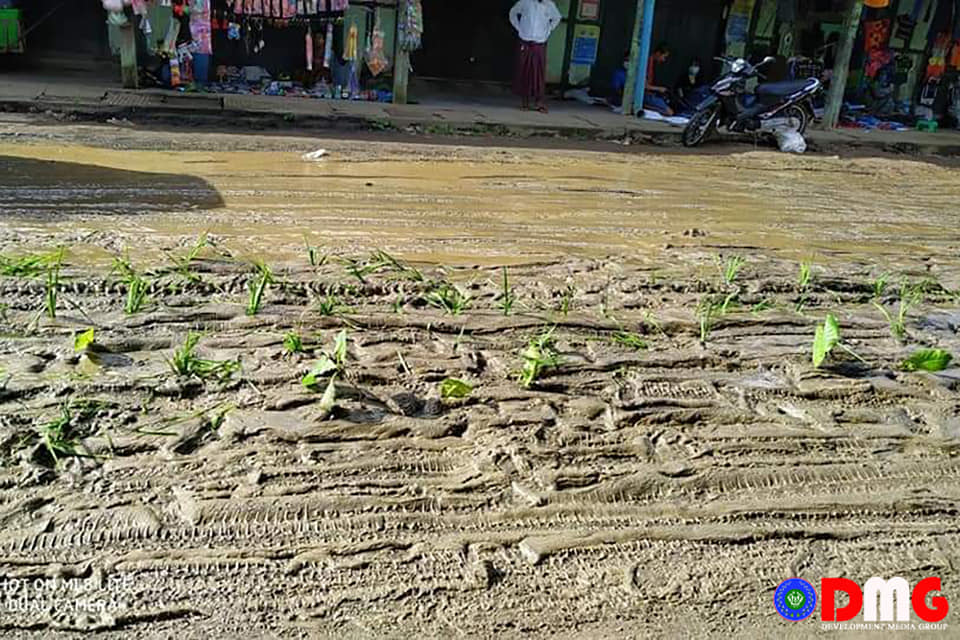 Residents of Mrauk-U, where an effort to list the ancient city as a UNESCO World Heritage site is ongoing, have criticised the Arakan State town’s municipality for using only crushed stones and sand to repair roads in downtown areas.

There are potholes on the roads in Taung Yat ward of Mrauk-U and the municipality repaired them on September 27, but people have since complained that they have not been able to use the roads conveniently as the roads are muddy because they were filled with only crushed stones and sand.

Ko Khaing Min Shin, chair of the Mrauk-U Youth Association, said: “It has been a long time that the roads in Mrauk-U were damaged. The municipality fixed the potholes on the roads by filling in pieces of bricks. It is not suitable to fix the roads in such a way in the town area. The road near the wholesale market is busy and the road is muddy now.”

The road near the Myoma Market road spans about 300 feet and is muddy following the municipal authorities’ repair work, so an identified group has planted some plants on the muddy road to ridicule the municipality’s work.

Ko Yin Soe, a resident of Mrauk-U, said road users are annoyed because of the big potholes on the roads, adding that there were some traffic accidents among motorbikes because of the damaged roads.

“I think they do not have the brains to think about what will happen after filling the holes with crushed stones and sand only. I want them to repair the roads so that we’re able to use them. Now, we cannot use the roads well though they did repair work,” he said.

An old man fell off his motorbike last week as he drove attempting to dodge potholes, he added.

Residents have called for the relevant government authorities to develop tarred roads in Mrauk-U town because the existing roads are dusty in the summer and muddy in the rainy season.

An official of the Development Affairs Department in Mrauk-U Township told DMG that the recent repair work is temporary and intended to benefit road users.

“We did it with goodwill. The repair work was done urgently as a temporary approach to be convenient for the road users because there are a lot of potholes on the roads. The result is bad because the repair work became unsystematic due to the rain. I told my members to repair them again by filling sand to cover the mud,” the official said.

The official added that repair work for the roads in Mrauk-U would be included in the budget to be allocated next year.