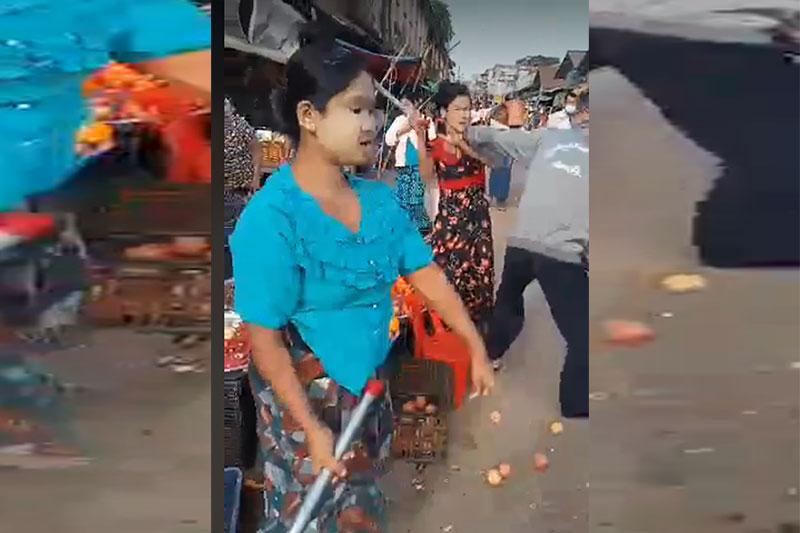 A scuffle broke out between municipal personnel and vendors at Sittwe’s Myoma Market on Wednesday morning as local authorities sought to evict the latter from the market’s no-vendor area.

The deputy head and other members of the Sittwe Township Development Affairs Committee sustained injuries to their faces, arms and elsewhere during the altercation, according to a municipal staffer who was involved in removing the vendors.

“We have banned vendors on this road to prevent traffic congestion,” he said. “We gave them a site to open their shops. We told them to leave the road, but they kept selling there … So, we seized their goods. The vendors beat us with umbrellas.”

Lawsuits have been opened against two women who allegedly assaulted municipal personnel, according to Sittwe’s No. 1 police station.

“The vendors were given new stalls, but they sold the stalls and opened their shops beside the road again,” said a woman with a shop inside Myoma Market. “They did not stop it although municipal personnel told them it is a prohibited area for vendors. When authorities seized their fruits and boxes, the two women assaulted them.”

Cases have opened against the two women under Sections 332, 294 and 114 of the Penal Code for deterring public servants from their duties, public obscenity, and abetment, police said.

DMG sought comment from the two women, but those attempts were unsuccessful.

U Khaing Kaung San, a resident of Sittwe, said vendors ought to conduct their business in the designated spaces.

“Vendors need to adhere to the regulations related to them. The situation between vendors and municipal personnel should not have occured. Their case needs to be dealt with effectively to prevent such a situation,” he said.

The township Development Affairs Committee on November 24 posted public notices outside the market saying vendors were barred from selling their goods outside the market and along roadsides in the vicinity, and that violators would have to pay a fine of K30,000.