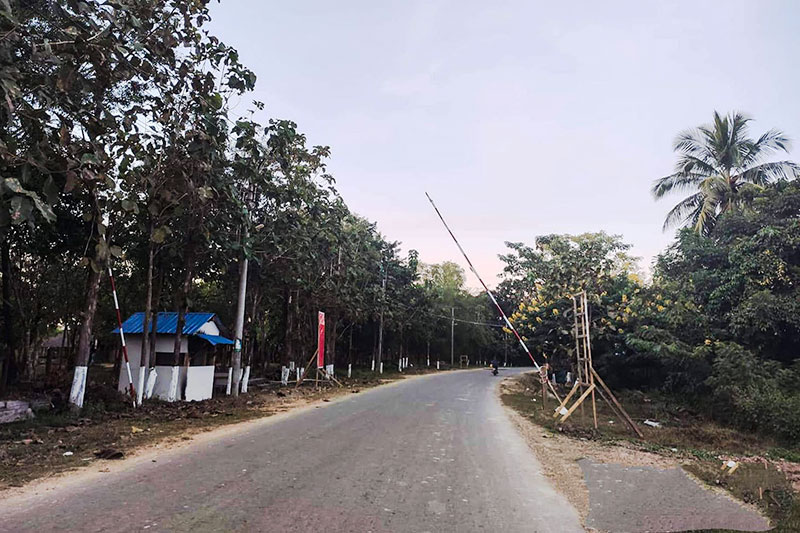 Tolls on roads and bridges, which were abolished in 2016 under the National League for Democracy (NLD) government, have been resumed at some points along the country’s roadways since the military coup on February 1. That includes toll-taking on roads and bridges in some Arakan State townships, locals said.

The toll rate at the Thandwe-Gwa road in Thandwe District has reportedly been lowest for a three-wheeled motorcycle, at K100 per bike. But at that same toll gate, a 22-wheeler trailer is charged up to K1,900.

“I have had to pay K200 at the toll gate, which is set up at the entrance or exit to the town. If I earn K1,000, I have to spend K200 for tolls and K500 for gasoline,” noted U Thaung Tun, a three-wheeled motorcycle taxi driver in Thandwe.

The Ministry of Construction announced on April 1, 2016, that it would cease collecting tolls at 160 toll gates in Myanmar’s regions and states. Among the toll gates were 18 from Arakan State.

The junta has resumed collecting tolls on roads and bridges, however, and is set to collect tolls at 10 toll gates in Arakan State, according to the Arakan State Administration Council.

“We are not convenient because we have to pay K200 per route. It would be best for us if we didn’t need to pay for the tolls,” he said.

The military council’s resumed collection of tolls could push up fares and put people at a disadvantage, said U Tun Thant Kyaw, chairman of the All Bus Lines Control Committee (Ma-Hta- Tha) in Thandwe Township.

“The tolls are collected but the roads are not good. If vehicle owners charge more for tolls and fuel prices, only the people will suffer,” he said.

There were more than 300 gates collecting tolls in Myanmar in 2016, according to figures released by the Ministry of Information at the time.