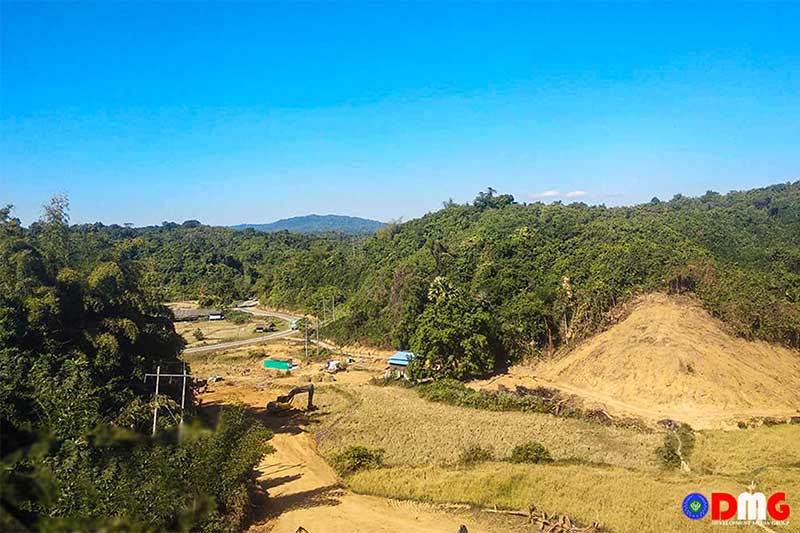 A hillside dam is being built in Gwaychaung village-tract in Arakan State’s Thandwe Township, according to the Irrigation and Water Utilization Management Department.

The hillside dam is being developed near Yaysin village in Gwaychaung village-tract at a cost of K600 million, U Aung Myo Oo, an officer from the township Irrigation and Water Utilization Management Department, told DMG.

Named the Yaysin hillside dam, it will provide drinking water to more than 8,000 people from villages such as Yaysin, Nattaungmaw, Chaungwa and Aleywa, he added.

“When the dam is completed, more than 8,000 people in nearby villages will have access to safe drinking water. Otherwise, people there face water shortages every summer,” he explained.

“The hillside dam covers an area of 0.1 million square miles and will hold 48 million gallons. The dam has been under construction since the third week of December 2021 and will be completed by the end of March 2022, according to the township Irrigation and Water Utilization Management Department.

“The dam is expected to be completed in March this year, but no water is available yet. The Department of Rural Development will install the pipeline to supply water to the villages once the budget is allocated in the next fiscal year,” he added.

He continued that a committee has been set up to pay land compensation to local farmers whose farmlands were included in the construction of a hillside dam and the government will pay the fixed rate.

At present, no specific compensation has been paid to the land owners, said U Tin Yee, whose farmlands were confiscated in the construction of the dam.

“In the current situation, how much will they pay per acre of land or crop compensation? They told us about the form of compensation set by the government,” he said.

According to the local people, the construction of the dam is good, but it is not clear about the issue of land compensation.

“There is little openness about the compensation for farmland and crops that were confiscated for construction of the hillside dam,” said U Khin Maung Htwe, a local farmer.