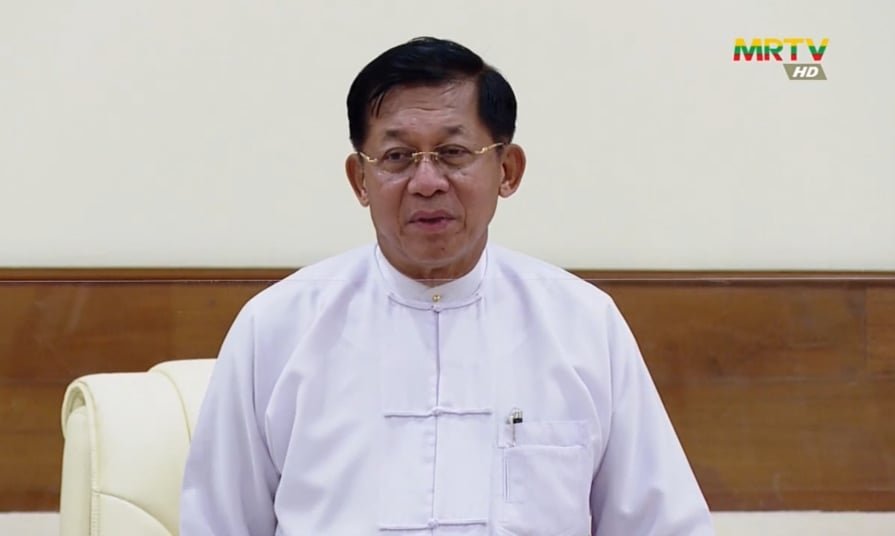 Speaking at a Wednesday meeting of the State Administration Council (SAC), the regime’s governing body, Min Aung Hlaing argued that it is difficult for Myanmar to achieve peace and stability as long as foreign countries interfere in the country’s internal affairs.

“Myanmar’s issues are to be decided by Myanmar citizens. Other countries can never interfere and make decisions on their behalf,” said the regime leader.

Salai Htet Ni, spokesman for the Chin National Front (CNF), suggested the regime and ethnic armed organisations (EAOs) should hold talks in the presence of international representatives in order to reach agreements that are binding on both sides.

“Under the rational intervention of the international community, the talks will be more transparent and more effective. In building mutual trust, we think we need intermediaries to decide which side is right and which side is wrong,” Salai Htet Ni told DMG.

Min Aung Hlaing invited Myanmar EAO leaders to peace talks on April 22, and urged them to register for the renewed dialogue by May 9.

Salai Htet Ni said the regime has invited EAOs to peace talks only to ease international pressures on it, and does not have a real desire for peace.

“There are times when two sides can’t reach an answer at the table. If international agencies and foreign countries intervene, talks are more likely to deliver results. They will help balance the demands of the two sides. Without them, the two sides will have disagreement over one thing or another. It has been proven in many years of talks that they [Myanmar’s military] have denied the rights that we [ethnic people] are demanding,” said U Pe Than.

So far seven signatories to the Nationwide Ceasefire Agreement (NCA) and three non-signatories will reportedly attend the face-to-face talks with Min Aung Hlaing in Naypyidaw, which the regime is reportedly hoping to convene by late this month.

Min Aung Hlaing has accused the KNU, the Kachin Independence Army and the Karenni National Progressive Party of having ties to the civilian National Unity Government (NUG) and its armed wing People’s Defence Force (PDF), as well as foreign countries.

“That’s why they have rejected the talks. It is hard for the country to achieve peace and stability as long as foreign countries interfere in Myanmar’s internal affairs,” said the junta chief.

The KNU, CNF and Karenni National Progressive Party (KNPP) released a joint statement on May 9 calling for all-inclusion if the regime is to solve Myanmar’s political crisis through talks. The regime’s invitation excluded the NUG and the PDF, and none of the groups engaged in active fighting with the regime has so far committed to attending the talks.