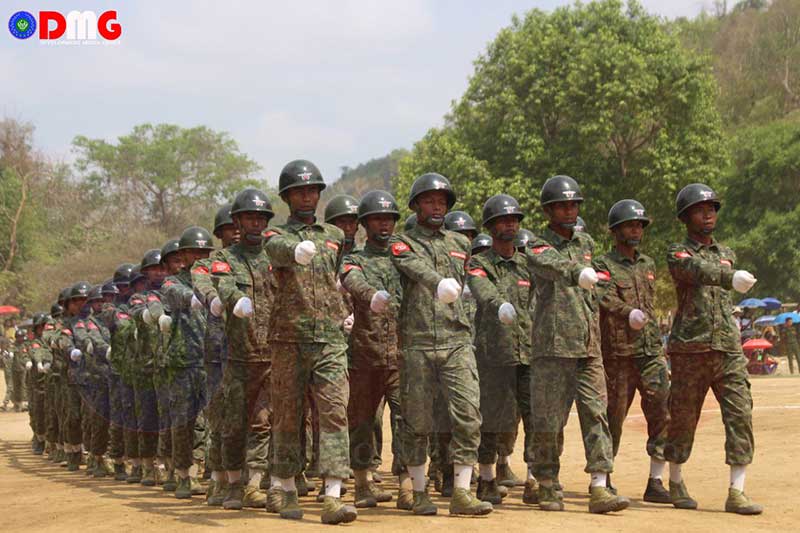 The Arakan Army and National Unity Government are on friendly terms, the AA spokesman said at a press conference on Tuesday, during which he also criticised the NUG’s adversary, Myanmar’s military regime, and junta efforts to disrupt the parallel administration that the AA is spearheading in Arakan State.

The Arakan Army recognises the NUG’s efforts to achieve genuine democracy and build positive relations with the ethnic armed group, U Khaing Thukha said at Tuesday’s online press conference, the third held by the AA so far this year.

“Our relations with the NUG are good, and we are more interested in having friends than enemies. It would be good to have a lot of friends because the goal of our revolution is to build our country. At any time, we continue to be friends with all the organisations that are fighting for national liberation in Myanmar, in addition to NUG PDFs,” Khaing Thukha said, referring to the People’s Defence Forces (PDFs) that serve as the NUG’s armed wing.

AA and NUG representatives held a two-hour online dialogue on May 16, and discussed avenues for bilateral cooperation, he added.

And while the AA considers its relationship with the NUG and its PDFs to be on solid footing, the same cannot be said for the ethnic armed group’s relations with the Myanmar military of late, U Khaing Thuka said.

Via intermediaries, the Arakan Army is negotiating with the military about the latter’s increased troop deployments in Arakan State recently, but tensions may rise if negotiations fail, U Khaing Thukha said. He added that junta efforts to interfere in AA governance initiatives in Arakan State were contributing to tensions in the region.

Since the military and Arakan Army reached an unofficial ceasefire toward the end of 2020, the ethnic armed group and its political wing have expanded a parallel governing apparatus that it administers in Arakan State, complete with a judiciary, revenue department and public security offices. Much of the administration was built up while the regime has been busy fighting anti-junta resistance forces that have proliferated across the country since last year’s military coup.

“The Myanmar military has constantly tried to arrest our judicial officers in Taungup and Kyaukphyu, and also threatened civilians who file complaints with our judiciary. These are the factors that worsen the situation day after day,” U Khaing Thukha said at Tuesday’s press conference.

“If this situation can’t be resolved, this will finally lead to military confrontation or something worse than that,” he added.

Amid sharp words from both sides in recent weeks, the ethnic armed group will not participate in peace talks proposed by junta chief Min Aung Hlaing in April, U Khaing Thukha confirmed.

“We have decided not to attend the peace talks invited by junta chief Min Aung Hlaing because of the current situation in Arakan State, the political stance of our allies, the repression, the arrests and the inconsistency of the Myanmar military,” he said.

“Basically, the regime can’t accept and tolerate the AA establishing its own administrative and judicial mechanisms in Arakan State,” said political analyst U Than Soe Naing. “So, we think those problems will explode one day. What Ko Khaing Thukha said today marked the beginning of the explosion.”

The two sides have largely observed an informal truce since November 2020, following two years of often-intense fighting in Arakan State and parts of neighbouring Chin State. But they have clashed at least four times this year, most recently on May 26 in Chin State’s Paletwa Township.

The Arakan Army has also provided military training, advice and weapons to the Bamar People’s Liberation Army (BPLA) and a handful of other anti-regime armed groups since the coup.