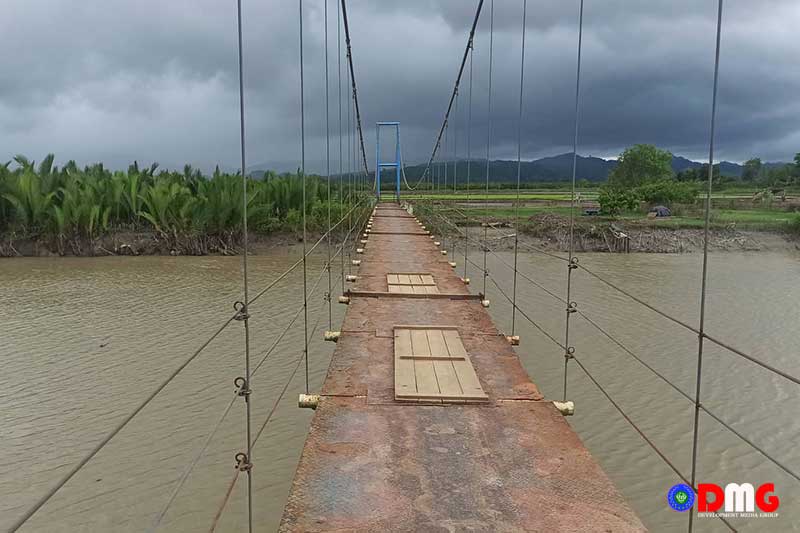 Residents of Rathedaung Township are having to repair the local Zedipyin-Maw Htet bridge with their own money after the military regime refused to fund the fixes.

The bridge is a suspension bridge, and its deck is reinforced with metal sheets. The deck is now damaged, however, creating inconveniences for locals, said U Hla Maung of Zedipyin village.

“The metal sheets are rusty and have holes, which pose dangers to those including students who use the bridge,” said U Hla Maung.

Through township-level military authorities, local residents requested that the regime’s Arakan State Administration Council repair the bridge, but the council replied that it would not grant a budget for repair in the current fiscal year, according to Zedipyin village administrator U Aye Tun Naing.

To make the needed repairs, the village administration has asked for donations from surrounding villages, and from Zedipyin village natives who are now working abroad.

The bridge is vital for some 30 surrounding villages, being located on the road linking Rathedaung, Buthidaung, Maungdaw and other townships.

“It is the bridge that links the areas to the north of Zedipyin with areas to its south,” said local resident U Maung Hla Khin.

Children from surrounding villages also use the bridge to go to the schools in Zedipyin, and parents are concerned for their safety as the bridge is damaged and the rainy season tends to elevate various associated risks.

DMG was unable to obtain comment from Arakan State Administration Council spokesman U Hla Thein about the council’s decision to defer bridge repairs.

The Zedipyin-Maw Htet bridge is more than 200 feet long and was brought into commission in 2015. As the bridge is crucial for townships in northern Arakan State, locals have called for upgrading it to a concrete facility.