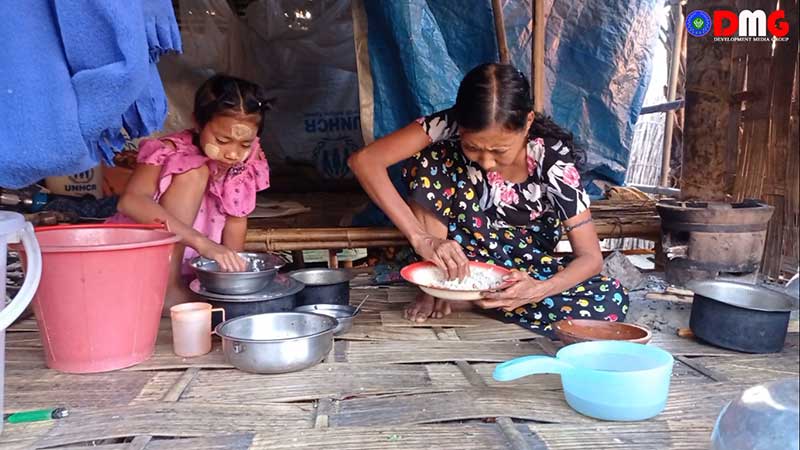 The number of people killed or injured by landmines while searching for food in forests has increased in Arakan State, with more and more internally displaced people (IDPs) being forced to forage lately due to food shortages at their displacement camps.

On June 14, a displaced man from Sanyin displacement camp in Myebon Township was killed and another was injured after they stepped on a landmine while searching for bamboo shoots. On June 22, two women from an IDP camp opened at a football pitch in neighbouring Paletwa Township, Chin State, were seriously injured after stepping on a mine while collecting vegetables.

Many IDPs have no choice but to forage in the forests because food supplies in the camps are not sufficient, said camp official U Ni Hla Aung of the Paletwa IDP settlement.

“IDPs are suffering hardship. The situation is worse for large families,” said U Ni Hla Aung. “There are few donors, and allowances provided by the WFP [World Food Programme] are not sufficient as food prices have surged.”

At least 56 people were killed and 134 others were injured in landmine and explosive remnant of war (ERW) encounters during some two years of fighting between the Myanmar military and Arakan Army in Arakan State from 2018-2020, according to figures from the Rakhine Ethnics Congress (REC). Though the two sides have largely refrained from active hostilities since then, landmine casualties have continued.

Daw Ma Hla Phyu, from Warr Taung IDP camp in Kyauktaw Township, said she had no choice but to face the risk of landmines, for her children’s sake.

“I have several children, and some of them are students,” she told DMG. “The provisions are not enough, so I have to find food in the forest. I have heard of and seen people being killed or injured by landmines in forests. I am frightened that I might also get hurt. But I have to go into the forest, otherwise my children will starve.”

More than 200,000 people were displaced during the two years of fighting between the Myanmar military and the Arakan Army. Many returned to their homes after the two sides reached an informal ceasefire in November 2020, but tens of thousands remain at displacement camps.

IDPs have generally received fewer donations from individual donors and civil society organisations since Covid-19 hit the country, and the situation deteriorated further after the Myanmar military seized power in a coup last year.

“IDPs have only received food supplies intermittently. And even if they want to do whatever jobs are available, job opportunities are almost non-existent,” said REC Secretary U Zaw Zaw Tun. “They are experiencing appalling hardship. Some IDPs even feel hopeless.”

Many suffer from depression, and there are few healthcare services being provided at IDP camps, U Zaw Zaw Tun added.