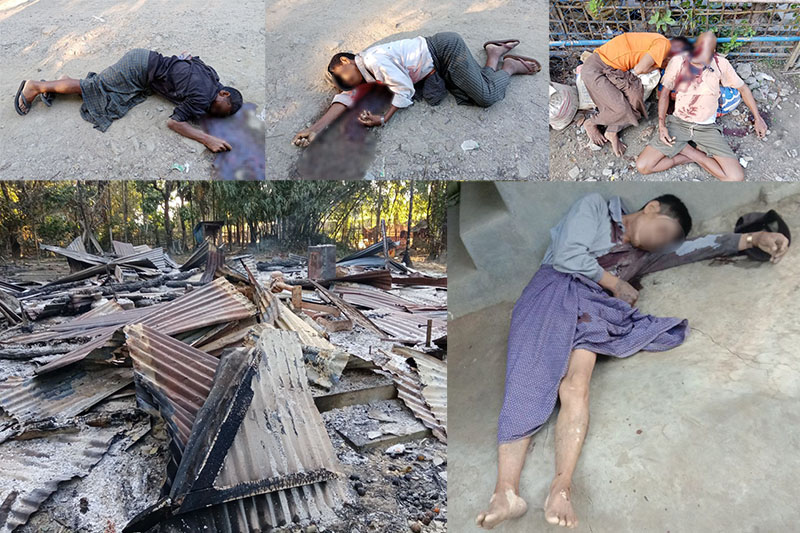 Nine residents were killed and at least 10 homes reduced to ashes in Hsininngyi Village, part of Arakan State’s Ponnagyun Township, on November 10, according to villagers.

The Myanmar military carried out airstrikes and fired artillery shells into multiple Ponnagyun Township villages after one of its trucks was attacked by the Arakan Army (AA) at a location between Padetha and Hsininngyi villages on Thursday morning.

Following the military’s apparently retaliatory aerial and artillery attacks, residents of Hsininngyi and Padetha villages fled to safer locations, though some elderly men and middle-aged men remained in the villages. Junta soldiers from the military’s Ponnagyun-based Light Infantry Battalion No. 550 arrived in Hsininngyi Village at about 4 p.m. on November 10.

At least 10 homes in Hsininngyi Village were torched and nine residents were killed, multiple sources confirmed to DMG.

“Two corpses were found at an entrance to the village. The two men were brutally killed [and were found] in a pool of blood,” said a resident who did not want to be named for security reasons.

“Another dead body was discovered on a concrete lane, and two corpses were found in the village, and they seemed to be shot dead when they attempted to escape. Two women and one man were killed under a home,” the unnamed resident added.

Sources who saw some of the bodies on Friday morning said gunshot and knife wounds were found on the bodies of the deceased.

“The couple remained in the village because they believed that they would not be killed. Their children were sent to another location. My sister-in-law hid in a bomb shelter as she felt sick. The couple was killed while attempting to flee when the military contingent entered the village,” Ko Thein Maung, a younger brother of the deceased U Khin Maung, told DMG.

The military had not yet released a statement on the situation in Ponnagyun Township as of press time.

At least six people were also injured in the junta’s November 10 retaliatory attacks. Among the wounded, a Grade 9 student was admitted to Sittwe Hospital and he will likely lose one of his legs.