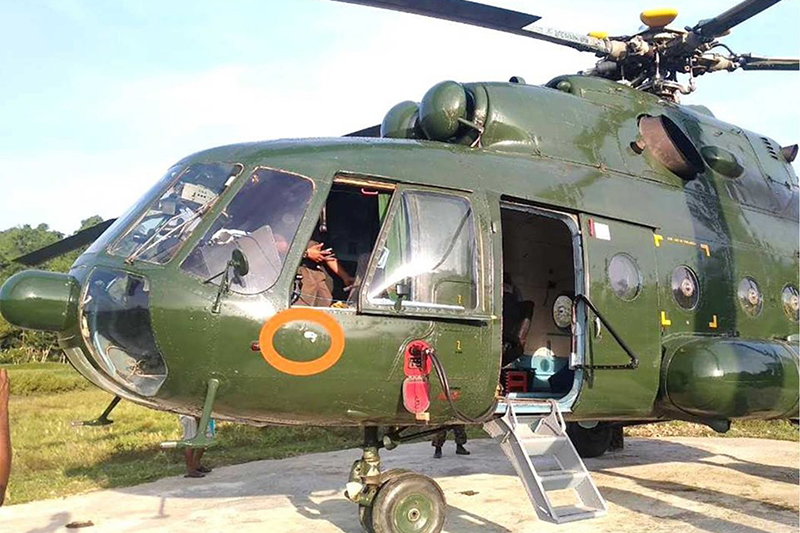 The Defence Services Department stated on the evening of October 27 that the head pilot, who flew the helicopter to rescue the detained Tatmadaw soldiers, was shot by the Arakan Army (AA) and injured people [Tatmadaw is still investigating which type of bullet the AA used].

In the statement, the Tatmadaw said that the AA shot the Shwe Nadi passenger ferry boat that runs from Sittwe to Buthidaung and detained Tatmadaw soldiers, policemen, government officials and some civilians on the morning of October 26.

The statement also said that security forces were sent via the Tatmadaw helicopters to the nearby accident to free the detainees as quickly as possible, that was when a helicopter pilot was shot by the AA.

The Tatmadaw also stated that they have rescued 14 people, who were detained by the AA from the different locations by using the helicopters.

The Statement also said that the Tatmadaw is cooperating between the air and land attacks against the AA to free all of the captives.

State-owned newspapers mentioned that the AA had detained 14 Tatmadaw soldiers, 29 policemen, two prisons department officials and 13 civilians who were travelling on the Shwe Nadi express ferry.

The Arakan Army (AA) also stated on October 27 that the gunfire from the Tatmadaw’s helicopters injured and killed many detained Tatmadaw military personnel and civilians, as well as AA soldiers.

The AA added that they had been planning to release the detained civilians as soon as possible.