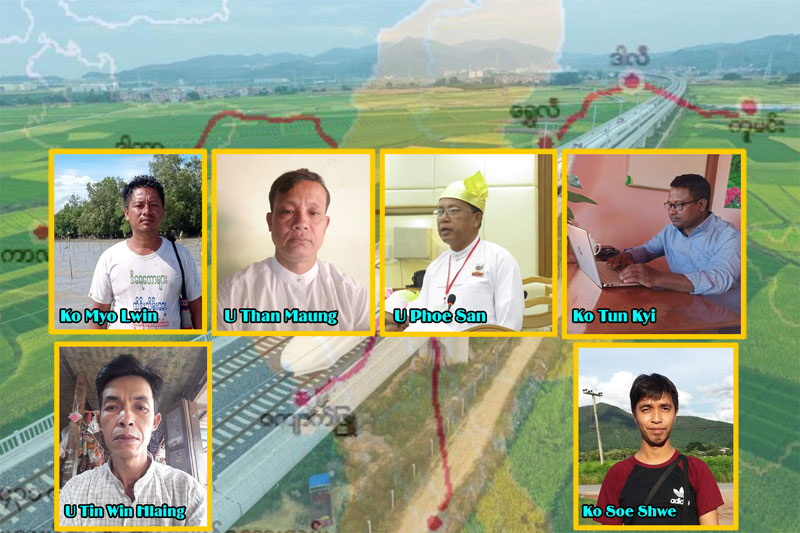 Earlier this month, the Chinese company China Railway Eryuan Engineering Group submitted a project proposal and signed a memorandum of understanding to conduct feasibility studies for construction of a railway linking Kyaukphyu in Arakan State with Mandalay in central Myanmar, part of a larger rail network connecting with China’s Yunnan province.

With local affected populations still mindful of past grievances over compensation and other issues related to implementation of the Shwe gas pipeline project in the region, DMG senior reporter Thiha sought input from locals over the planned undertaking of feasibility studies for the envisioned railroad.

I think the environmental and social impact assessments might be performed in the feasibility studies first. I think it might probe what will cause impacts based on social and environmental affairs. Mainly, as the EIA law was enacted in Myanmar in 2015, heavy projects could not be implemented without conducting the EIA.

Due to land compensation problems that happened in laying the Shwe gas pipeline, it is necessary to systematically manage land problems for local people who own their lands traditionally but without evidence. In implementing the laying of the gas pipeline project, many people lost their land plots but did not get land compensation. The gas pipeline passed through villages and cemeteries. Although the restrictions adopted [stated that] important sites of villages and noble places shall not be used for projects, the project broke such restrictions by laying pipeline passing through these areas.

Therefore, it should emphasise the social impact assessment, which might play a key role in the feasibility studies.

U Phoe San, MP for Kyaukphyu Twsp in the Arakan State parliament

These three are the most important. If there is no impact of EIA, SIA and HIA, any project can be implemented to benefit the people as well as the country. If not, people will face losses and grievance. The project will not benefit the state and the country but it will serve the interests of China. If so, all will face only losses. They said they have plans for the project and have conducted assessments but no one knows their plans and assessments on the ground. I don’t have experience wherein local people from villages of Arakan State face loss and grievance, and companies have many plans for how to compensate the people. We need a government and foreign companies that will strive for improvement of the poorest state with goodwill.

The government has so far failed to address the impact on the environment, natural resources and socioeconomic life when developing the Shwe gas project. The government needs to make sure that this does not happen in the Kyaukphyu-Mandalay railway project. It is important to take into account the environment that will be involved in the project, the local property and the cultural traditions of the local community. The government needs to be able to address the views and grievances of local people through legal means and create job opportunities to replace the degraded fields in the project area.

Large-scale projects in Arakan State are running up against the plight of the poorest people in the lower echelons, and it is necessary to create guaranteed employment opportunities for the local people. These things need to be studied in advance. In addition, the developer needs to be serious about the locals and act ethically in accordance with its commitments. Another point is that no matter what the project, the locals currently have no right to manage it and their voices are not allowed to participate. You also need to be aware of this.

If we are going to do research on the project, we have to be very careful about the environmental and socioeconomic impacts. According to the existing law in Myanmar, an environmental impact assessment (EIA) is required. So I really want this to be done systematically and in accordance with international standards.

I want the developer to think about what might be really harmful, not just what happened, and how the developer can best plan this based on the findings of those studies. Another problem is that we want to see as little in the way of socioeconomic human rights violations as possible at this time. Local people were not allowed to say anything about their grievances in the time of the military regime, when the pipeline project was implemented. The people do not want that bad history to repeat itself. There will be people who will be affected by the implementation of this project.

But I want the government to choose the kind of system that minimises harm to the people and thinks carefully about how to remedy and mitigate the damage. In addition, I would like to see the views of the people on the ground and the participation of the people in the analysis. [In practice], this looks like the government wanting to go down to the ground and conduct a review rather than holding a workshop in Nay Pyi Taw and conducting a workshop in Yangon. For example, the Settlement and Land Records Department lists vacant land as vacant land, but it is also a place where villagers live and work. Therefore, I want the government to consider the situation on the ground and then implement the project.

U Than Maung, resident of Kapaingchaung village in Kyaukphyu Twsp

The Kyaukphyu-Mandalay railway project is good for regional development. But in the past, when the gas pipeline was built, some locals signed a petition saying that they would get the proper compensation. In practice, however, the locals did not receive proper compensation. So people in this area are worried that it will happen again.

Therefore, when conducting inspections for the railway project, it is necessary to explain to the locals with certain commitments. I also want government officials to come and see where the railways are being built. And I want them to have discussions with the local people. Otherwise, local concerns will not be allayed. We do not want the villagers to see a repeat of the impossible promises made by the government the first time.

We want the current farmers’ organisations on the ground to conduct a thorough field study with the township administration when implementing the Kyaukphyu-Mandalay railway project. Otherwise, problems may arise during the construction of the railway.

When the oil and gas pipelines were built, local farmers suffered a lot. Some farmers received compensation from the project company, but others did not. Some farmers have been threatened to the point of dissatisfaction with the latest compensation. So we want the railway project to proceed only after we have properly planned and addressed these issues first. Some locals are saying they do not agree with the railway until the issue of compensation is finalised.