Vox Pop: What will 2022 bring for Arakan State? 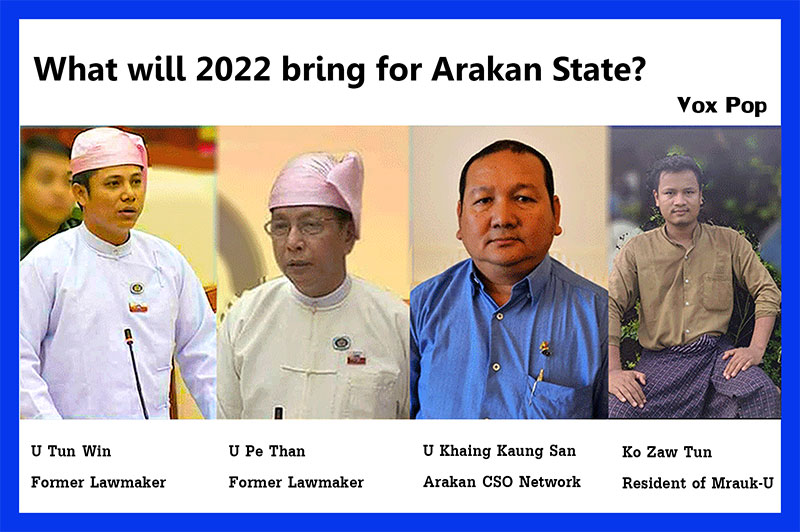 Some two years of conflict between the Myanmar military and Arakan Army (AA) that began in late 2018 came to a halt toward the end of 2020, with 2021 being a relatively peaceful year for Arakan State when compared with its recent past. An informal ceasefire that put a stop to the hostilities circa November 2020 has held for more than a year, but a military coup on February 1, 2021, has dramatically altered the political and conflict dynamics across Myanmar in the 11 months since the takeover.

With a new year underway, DMG interviewed politicians, civil society leaders and ordinary folk in Arakan State about how they think the state’s political and military situations will play out in 2022.

U Pe Than || Former Lawmaker

The political situation in 2022 will be the consequence of 2021. The situation in the state after the February coup is different from other regions and states. Both sides have halted the fighting.The AA was delisted as a terrorist organisation. At the moment, there is no civil disobedience movement or People’s Defence Force (PDF) in the state.

As there is no armed conflict, the situation in the state in 2021 was peaceful. Some internally displaced people (IDPs) returned home while some of them could not return home for security reasons. Whether this situation can be changed to something [better] in 2022, or clashes between the AA and Myanmar military resume, depends on the political situation.

The state’s political situation has not significantly changed now. All are peaceful under the control of the United League of Arakan/Arakan Army (ULA/AA). So, if the situation is not changed in 2022, the state will be peaceful. However, the situation in 2022 will be decided according to the military situation, I think.

The military situation in Arakan State will be stable in 2022. I think there will not be fierce fighting as in 2018 because both military leaders have had discussions.

Meanwhile, there are clashes in Kachin, Kayin and northern Shan states, while there are PDF movements in Magway and Sagaing regions, and Chin State. So, the military situation in Arakan State might be considered stable. If a clash occurs in Arakan State, it will stop in hours, as happened in Maungdaw.

As far as politics, Arakanese people do not believe in politics. As there is no parliament, political parties have faded. Even the political parties that are registered cannot do anything for the affairs of the state. I must say, people’s interest in politics has vanished and this will continue in 2022. A majority of the Arakanese people are not interested in the politics of Myanmar, especially most young and middle-aged people have expressed their opinion that there is nothing apart from armed struggle.

In 2022, the political situation in Arakan State will not be significantly changed. The existing political parties cannot fulfill the needs and hopes of the people.

We have to wait and see what will happen in 2022. As for the ULA/AA, it created new forces the entire year. Then it built administrative and judicial mechanisms. It did organisational activities. So, we must say it is ready for anything if fresh clashes occur in 2022. Meanwhile, the military faces local resistance fighters led by the National Unity Government (NUG), as well as international sanctions.

The AA did well in its activities. The AA did not stop and did not go backward, but rather it is moving forward while the military has stopped or gone backward on some issues. So, the military will not think to conduct offensive operations against the AA because it is impossible to conduct offensive operations against a revolutionary organisation that had enough time to prepare in 2021.

The AA also cannot conduct offensive operations against the military in early 2022 by taking a chance on its current situation, because it has not reached a perfect system, even though it has good resources while it is building a government, administration and judiciary. So, I do not think the AA will do anything that could reignite clashes with the military in the early part of this year in Arakan State. They will refrain from fighting and playing political games as in 2021, and will play games to compete for hearts and minds.

The year 2021 was the year when the wounds of war were treated. Meanwhile, the people suffered the impacts of the Covid-19 pandemic. In 2022, there will be a solution to meet the hopes and demands of the people politically and militarily. I wish we can all work together to reach a solution. The current situation of Arakan State is that both sides that were involved in an armed conflict in the past can build trust to some extent under the aegis of the AA.

Against that backdrop, we saw an attempt to spark conflict. We need to be careful not to return to the previous condition. It is not easy to predict the military situation. When the AA told the people to be careful about a resumption of war, people raised concerns about fresh clashes.