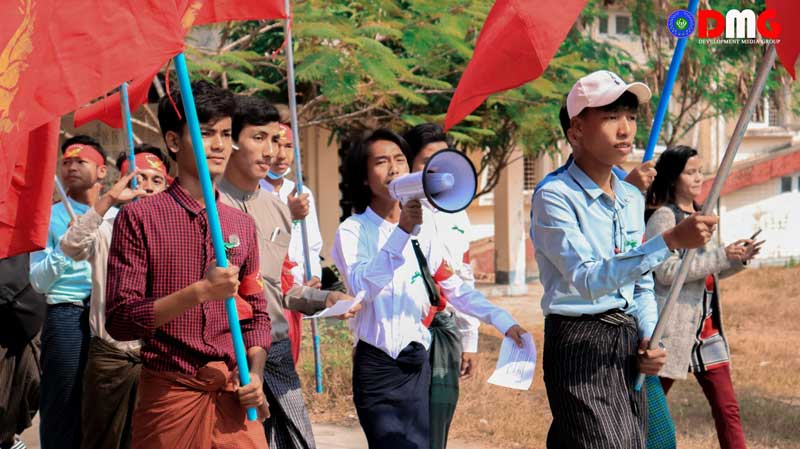 Sittwe University students on January 28 showed their support for a nationwide green-ribbon campaign objecting to a Ministry of Education decision to push back basic education exams to the end of March, effectively extending the academic year by one month.

Some 300 students participated in the event, which was organized by the Sittwe University Students’ Union. They marched on the Arakan State capital campus carrying placards enumerating their concerns.

Ko Toe Toe Aung, the incoming chair of the Sittwe University Students’ Union, told DMG that he did not think the new policy of extending the academic year for primary schools would improve Myanmar’s education system, saying there were many children who could not attend school at all, and that “self-help” schools were still being established in ethnic regions to compensate for shortcomings in government-run education.

“I think extending the academic year without [first] trying to make sure all children can access education is not an effort to improve Myanmar’s education system. Do the relevant departments notice the situation, that there are children who can’t go to school?” he said.

Placards carried by the protesters included messages such as, “Can the country’s economy improve by extending the timeline of final exams for basic education schools to the end of March?” and “Authorities should stop disrespecting students.”

The students brought other grievances to the demonstration as well, demanding that security be ensured at Sittwe University and that several campus improvements be made.

“We are demanding the points we really need. We will take to the street or open a protest camp if we need to do so,” Ko Toe Toe Aung said.