Arakan State youth activists protested in Sittwe, Taunggup and Kyaukphyu towns on Saturday afternoon demanding an immediate restoration of internet access in Arakan and Chin states, where an internet blackout has been in place for more than eight months.

Members of the Arakan State Students’ Union and Arakan Youth New Generation Network said the protests were intended to highlight the socio-economic damage the ban was doing to the region. Protesters also sought to spotlight the concerns raised by the continued deprivation of a communication means used to convey important information, including reporting of human rights abuses in the conflict-wracked region.

The internet ban has been described as the longest ongoing blackout of its kind in the world, and more than 800,000 people were suffering from its effects, said Ko Min Bar Chay, a leader of the Arakan Youth New Generation Network.

“The internet ban affects education, society and healthcare access. The government knows it. However, they did it to hide what they are committing,” he said.

President Office spokesperson U Zaw Htay has defended the internet ban as a temporary but necessary security measure.

“The ban will be lifted one day when the time is right,” U Zaw Htay said at a press conference in Nay Pyi Taw.

More than 100 people participated in Saturday’s Sittwe demonstration, with the protests in Taunggup and Kyaukphyu towns drawing similar numbers. 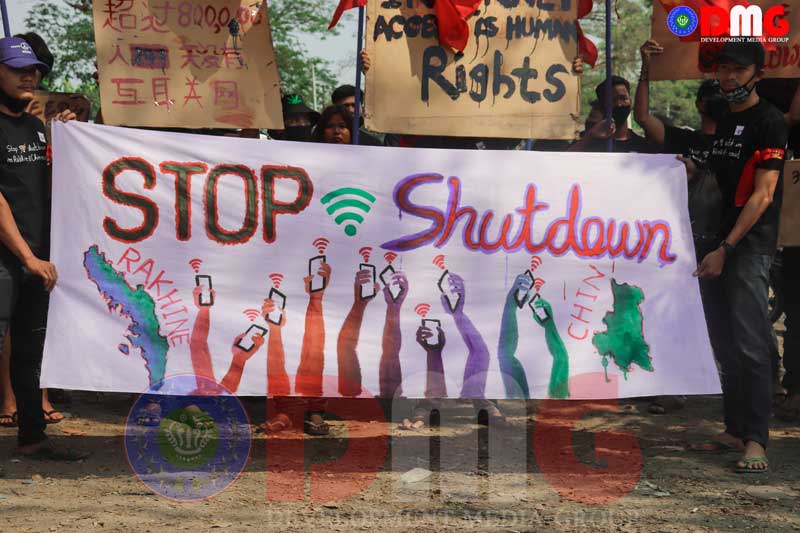 The ban was lifted on September 1 for Buthidaung, Maungdaw, Rathedaung, Myebon and Paletwa townships, but was reimposed on February 3.

Fighting between the Tatmadaw and Arakan Army in these townships has been fierce, and more than 100,000 people have been displaced by the conflict over the past year.

Meanwhile, a petition similarly demanding an end to the internet blackout was sent to the president and State Counsellor Daw Aung San Suu Kyi on February 21, according to Maung Saungkha, executive director of the free speech advocacy group Athan.

The organization collected more than 300 signatures both online and on the ground, he told DMG.

“We staged a protest to lift the ban,” Maung Saungkha said, referring to a demonstration his group organized in Yangon in December. “But we need to practice an official way of getting the message to reach state leaders.”

Athan plans to carry out an extended campaign in cooperation with other civil society organisations if the government does not respond to the petition and its demand.

“We will wait and see a month after we submitted the signatures,” Maung Saungkha said.

In addition to local civil society groups, international organizations and foreign embassies including the US and British missions in Yangon have also called on the government to restore internet access in the affected townships.