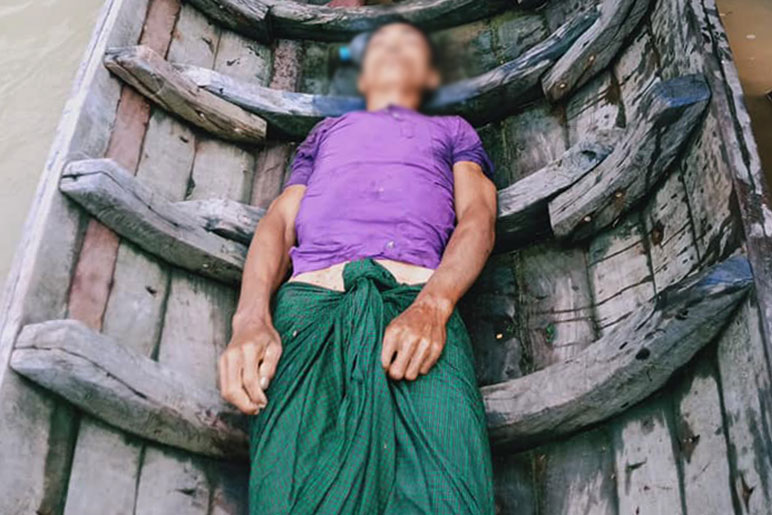 A resident of Nat Taung village in Ponnagyun Township, Arakan State, died of a gunshot wound on the morning of June 29, according to locals.

U Soe Tun, 51, was hit by gunfire from the direction of Ohthaema Mountain on his way back to the village after transporting his wife across Sanmati creek by boat, the residents said.

The victim died aboard his boat as the bullet penetrated his neck, Daw Ma Soe from Nat Taung village told DMG. The victim’s younger brother retrieved the body and boat by swimming out to it.

Tatmadaw troops have reportedly been stationed on Ohthaema Mountain for more than six months, with residents of nearby Nat Taung village living in fear, said U Aung Than Tin, a lawmaker from Ponnagyun Township.

“There are deployments of Tatmadaw troops in Letwelsartike and Kanhtaunggyi, et cetera, along the creek. The villagers find it difficult to go outside to purchase food. The villagers have said they get shot at when they go outside the village,” he added.

When DMG phoned Major-General Tun Tun Nyi of the Tatmadaw True News Information Team seeking comment on Monday’s shooting, the individual who answered the phone said the military spokesperson was “attending a meeting.”

Upper House MP U Khin Maung Latt said the government needed to take action against the shooting of civilians.

“The situation will become worse as long as the government turns a blind eye to it due to the lack of investigation and action taken against those who committed the crimes,” he added.

On June 25, a man fishing along the banks of the Laymyo River was shot and killed by gunfire coming from the direction of Aungmingalar Mountain in Minbya Township.