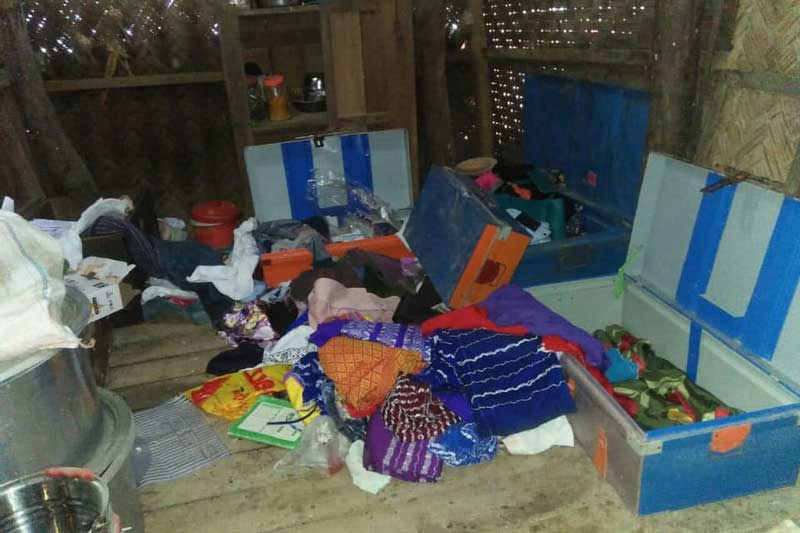 About 30 houses in Rathedaung Township’s Shay Yar Taw village were burgled last week while their owners were away, having fled violence in the area, according to residents.

Many inhabitants of Shay Yar Taw sought safer locations upon hearing gunfire as a military battalion entered nearby villages on June 30, locals said.

Tatmadaw troops are accused of looting valuables and commodities from homes and grocery stores in the village on the evening of July 2 while residents were absent, said Daw Hsan Hsan Oo, one of the grocery store owners. Clothes and foodstuffs were burgled from her shop, she added.

“They took all things on sight in the village. I am really disappointed about the burglaries and I have no idea what to say,” she said.

A pair of golden earrings, foodstuffs and four blankets were taken from a home owned by Daw San Aye Nu, who said the looters chopped six boxes into pieces.

“They took valuable things and destroyed items they could not take. The items destroyed by the Tatmadaw security personnel are priceless for the poor like us,” Daw San Aye Nu said.

Shay Yar Taw village comprises more than 40 houses. One villager who remained behind when most others had fled was arrested by the Tatmadaw but later released when the troops withdrew from the village, residents said.

The government is responsible for the safety of people and their property, and action should be taken against those who violate the law, said U Khin Maung Latt, the Upper House lawmaker for Rathedaung Township.