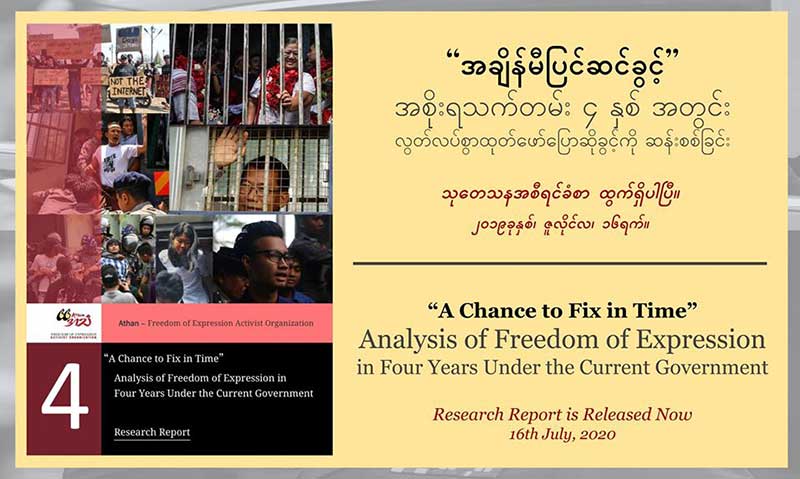 In the first four years of the National League for Democracy (NLD) government’s five-year term, cases involving violations of free speech were filed against 1,051 people, according to a July 16 statement from the freedom of expression group Athan.

Charges brought under sections of the Telecommunications Law topped the list. Other cases before the courts have included alleged violations of the Peaceful Assembly Law, the Official Secrets Act, the Unlawful Associations Act and the Counter-Terrorism Law, the Athan statement says.

“As a government that is claiming to be on the democratic path, the government’s oppression of the public’s freedom of expression shows that what it does runs counter to what it says,” said Ma Htet Htet Zaw, a researcher for the group.

Ma Pansu Pyae Eain, another Athan researcher, said: “In the time of the incumbent government, the government, the army and police are oppressing the right to freedom of expression.”

Maung Saungkha, executive director of Athan, said the government should rescind charges against those facing legal action for criticising the government or military, as well as news outlets or their staff involved in critical coverage of those in power, and to release those unjustly convicted of crimes.

In the first four years of the incumbent government’s term, there were 539 total cases — 89 in the first year, 110 in the second, 176 in the third year and 164 in the fourth, Athan reported.