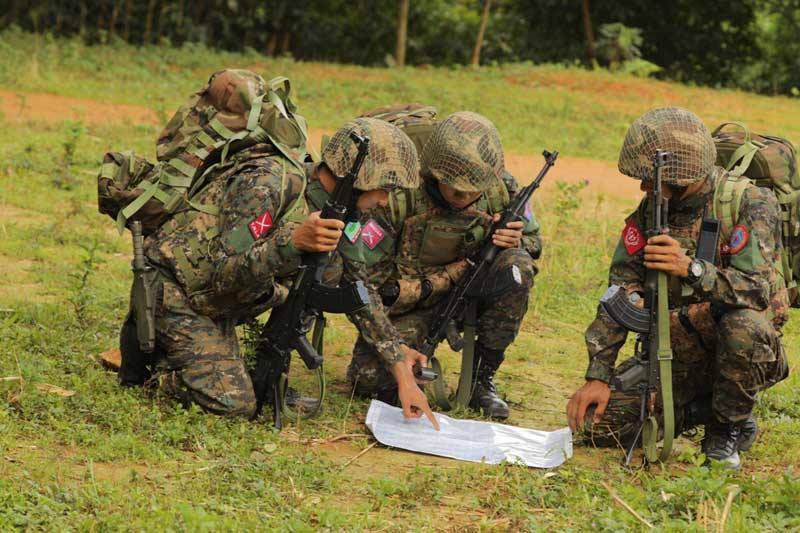 The Three Brotherhood Alliance has urged the Myanmar government to withdraw its declaration of ethnic armed organisations as terrorist groups and unlawful associations in order to build trust in the country’s peace process.

The groups that make up the Three Brotherhoods Alliance — Myanmar National Democratic Alliance Army (MNDAA), Ta’ang National Liberation Army (TNLA) and Arakan Army (AA) —  released a statement on November 11 in which they announced an extension of their collective unilateral ceasefire through December 31, and also called on the government to rescind declarations of ethnic armed organisations as terrorist groups.

The government and military jointly declared the Arakan Army to be a terrorist group and unlawful association on March 23.

The Tatmadaw is playing a key role in the peace process, and ethnic armed organisations need to grasp chances to participate in the political arena, said Yebaw Mi Hsu Pwint, a member of the central leading committee of the All Burma Students’ Democratic Front (ABSDF), which was itself considered a terrorist organisation under the previous military government.

“If ethnic armed organisations cannot grasp opportunities for political engagement, ways of dialogue with the Tatmadaw may halt or recede. If power struggles are big in the coming term of the government, it will harm the peace process,” she added.

The Three Brotherhood Alliance on September 1 announced a unilateral ceasefire to remain in effect through Election Day 2020, but which was due to expire this week. Wednesday’s statement said the ceasefire would be extended until the end of the year.

The Tatmadaw issued a statement on November 9 announcing the formation of a five-member committee of generals to hold peace talks with ethnic armed organisations, including non-signatories to the Nationwide Ceasefire Agreement (NCA), a group that includes the Three Brotherhood Alliance members.

The alliance demanded a review of the peace process by the next government, and called for the implementation of a peace process serving the interests of the people.

U Pe Than, the Lower House MP for Myebon Township, said it was necessary to remove the AA’s terrorist label in order for peace talks between the two sides to move forward, with their conflict approaching its unofficial two-year anniversary next month.

“If such points can be implemented, the momentum of the armed conflict will decline,” the lawmaker added. “And then, they have to practically sign the NCA for holding dialogues at different levels of the peace process, or sign a bilateral agreement for forthcoming dialogues. They should not issue merely nominal announcements and, at a basic level, should not continue fighting.”

“It is a problem of both sides,” said Monywa Aung Shin, secretary of the NLD’s Central Information Committee. “For example, the Tatmadaw has declared a unilateral ceasefire. However, it was ineffective. Now, the Three Brotherhood Alliance announced a ceasefire statement. However, it is not effective. So, both sides actually must abide by their respective policies. If terrorists wish to see restrictions eased, they have to abide by the policies.”

According to data collected by DMG, a total of 52 civilians were killed and 152 were injured in the Arakan State conflict from June to November 12.