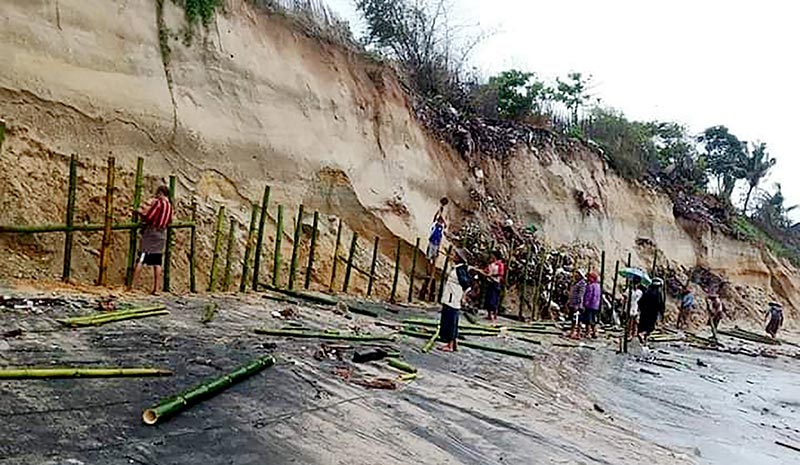 Kone Bwe village in Arakan State’s Kyaukphyu Township has been experiencing riverbank erosion for decades, according to locals.

Locals say because the government has not done anything to prevent riverbank erosion, the villagers have been working to address the issue themselves over the past three years.

However, since a retaining wall made by the villagers as part of those efforts is made of bamboo, it is in poor condition and needs to be repaired every year.

“Bamboo is not enough to build a retaining wall. People are also struggling to make ends meet, so they have to make a voluntary contribution to collect K10,000 [$6.05] from each house,” said Ko Aung Myint Soe, a resident of Kone Bwe village.

Landslides are a source of concern for residents as they move closer to existing homes and make it difficult to relocate.

In the past, more than 200 feet of distance separated the riverbank from residential areas in Kone Bwe village, but with landslides occurring every year, the river’s waters are gradually getting closer to homes.

“If the sea waves come and there is no obstruction under this shore, we cannot say when the shore will collapse. If the seawaters erode below this 30-foot-high cliff, houses would collapse. People living in nearby houses do not dare to sleep at night,” said U Maung Thaung, a resident of Kone Bwe village.

More than 1,300 people live in 250 houses affected by recent landslides or the threat thereof in Kone Bwe village.

In addition, landslides continue to occur in the villages of Payit and Yay Kauak, which are part of the Thu Htay Chaung hydropower project in Thandwe Township, according to locals.