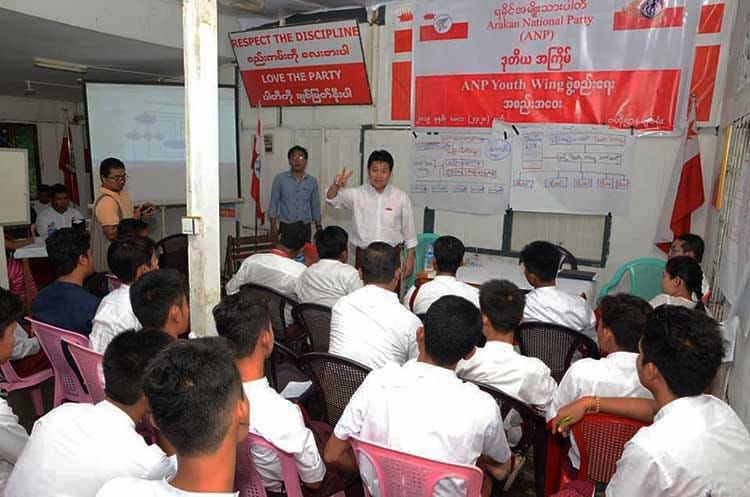 The ANP Youth Wing has urged the Arakan National Party (ANP) to work hard to establish clear principles for the overthrow of Myanmar’s dictatorship, and for achieving national equality and self-determination.

The ANP Youth Wing made its wishes known in a statement issued on the occasion of International Youth Day on August 12.

“We urge the party’s top leaders, members of the Central Committee, and the Central Executive Committee, to adhere to a clear set of principles,” said Ko Hsan Htay Maung, an information officer of the ANP Youth Wing.

If the ANP is committed to overthrowing the dictatorship, national equality and self-determination, the ANP Youth Wing will join as necessary, he added.

In its statement, the ANP Youth Wing said it supported the decision made by the ANP to suspend its cooperation with the State Administration Council (SAC), aka Myanmar’s military regime, at a meeting of the ANP Central Executive Committee on May 4.

In the weeks following the February 1 military coup, the ANP was criticised over its decision to work with the junta, with one of the party’s senior members taking a seat on the SAC. Multiple party members tendered their resignations in protest of its cooperation with the military government, which the party eventually walked back.

The ANP Youth Wing’s statement on Thursday said it sees the need for an end to the dictatorship and the establishment of a federal democratic union.

“We are deeply saddened by the ongoing political unrest in Myanmar, which has resulted in daily grievances such as loss of life, injury, disability and displacement, as well as a state of hostility and resentment among the people,” the statement reads.

The statement also honoured the young people who have been at the forefront of the fight against the Covid-19 pandemic that has confronted the world, including Arakan State.