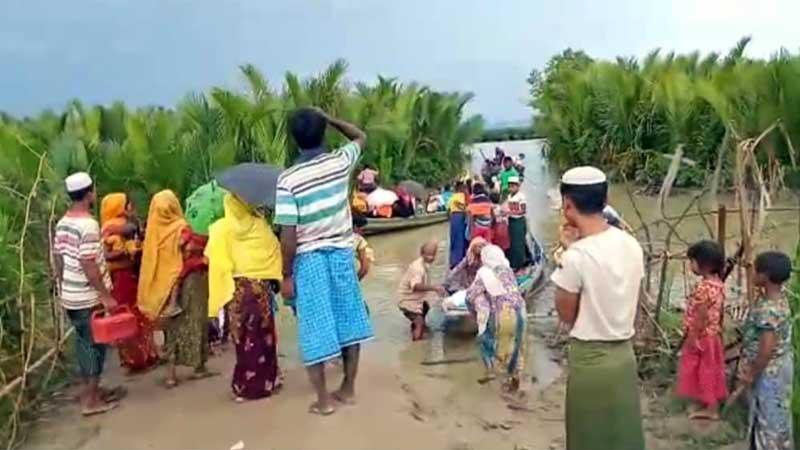 The Tatmadaw fired artillery shells without any provocation from adversaries resulting in almost all residents of Sin Khon Taing Village in Rathedaung Township fleeing to safer locations, locals said.

The Tatmadaw shelled Sin Khon Taing Village where over 3,000 Muslim locals reside, with heavy artillery since 10 October, said a resident who declined to be named.

Locals said that seven houses have been damaged by artillery shells fired by the Tatmadaw.

Col Win Zaw Oo, the spokesperson for the Tatmadaw’s Western Command denied the reports of artillery shells fired by the Tatmadaw and accused the Arakan Army (AA) of looting gold and cash from locals and destroying some houses.

But he admitted that the Tatmadaw is conducting a clearance operation near the village. “The clashes between the Tatmadaw and AA would take place sooner or later” he said.

Seven men disguised as civilians and equipped with arms raided Sin Khon Taing Village in Rathedaung Township on 6 October, robbing valuable property from the villagers and killing two cows. The unidentified men have been charged under the Anti-Terrorism Law at Zedipyin police station, according to a statement issued by the Myanmar Police Force.

Khaing Thukha, spokesperson of the Arakan Army (AA) rejected the allegations of the Tatmadaw.

“This is a groundless accusation made by the Tatmadaw. I understand the intention of the statement released by the Myanmar Police Force. The press release states seven armed men of Arakan dialect. I can say that it is a fabricated statement,” he said.

Khaing Thukha continued that the Arakan Army (AA) has been active near Muslim villages for many years and there have not been problems with the Muslim community.