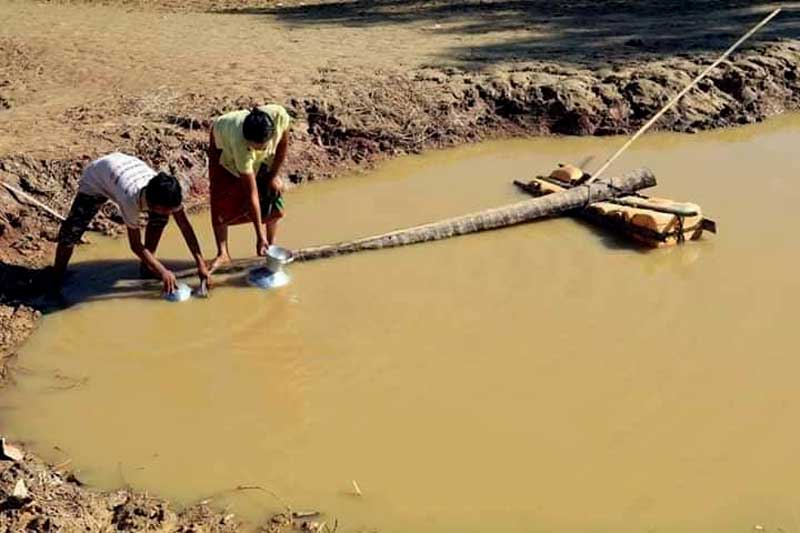 Some IDP camps in Arakan State’s Kyauktaw and Ponnagyun townships are facing drinking water shortages and are being forced to “thriftily” use the potable resources they have, according to camp refugees.

One such camp is Taung Min Kalar in Kyauktaw Township, where more than 500 refugees are sheltering. There, IDPs are using murky pond water, which has started to dry up, with a quota system now in place, refugee Daw Aye Ma Khaing told DMG.

“Now, we can no longer use squat toilets as we have to use water thriftily. That’s why some children here are suffering from diarrhea. We have faced difficulties as there is no doctor here,” she said.

Kway Thay and Pha Kywal IDP camps in Ponnagyun Township are also facing a scarcity of drinking water, said U Shwe Baw Sein of the Rakhine Ethnics Congress, which has collected data on IDP issues.

“For a village with a population of 300, water from the village’s ponds is enough only for its villagers. When refugees from other areas arrive there, water runs out quickly,” he said.

With refugees from IDP camps in Buthidaung, Rathedaung and Mrauk-U townships also facing water shortages, the displaced say they want the state government and civil society organisations to provide water for them.

Across Arakan State, the number of IDPs has surpassed 100,000 and civilian casualties are on the rise due to escalating conflict between the Tatmadaw and Arakan Army (AA). The displaced have struggled to meet basic needs ranging from food and shelter to healthcare and clothing.