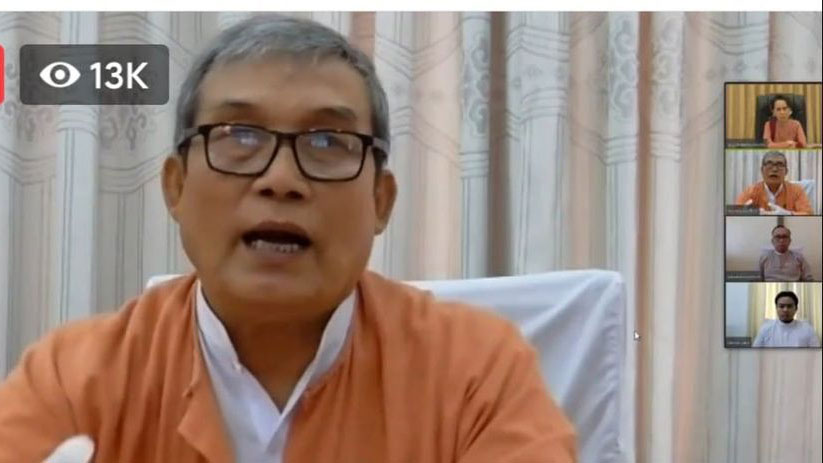 Arakan State Chief Minister U Nyi Pu has said he is worried about those living in camps for internally displaced people (IDPs) and other war-displaced populations amid an ongoing outbreak of coronavirus infections in the state.

“The IDP camps and war-displaced camps are crowded. And the local transmission outbreak this time is rapidly spreading among residents. So, I am worried about people in the camps,” he said, voicing his concern during an online meeting on prevention, control and treatment of COVID-19 held on August 28.

U Nyi Pu said his government would address the dual challenges of the pandemic and armed conflict in the state.

“Unity is the most important thing at the moment,” U Nyi Pu said. “Although the pandemic is a challenge for us, I hope there will be good prospects for the future of the state if we make good use of the opportunities we have received and we can ensure unity among us. So, I’d like to request all to be united.”

From August 16-28, a total of 226 COVID-19 cases were reported in Arakan State — 136 in Sittwe Township; 14 each in Pauktaw and Mrauk-U townships; 19 in Maungdaw Township; six each in Buthidaung, Myebon and Kyauktaw townships; five in Minbya Township; seven in Kyaukphyu Township; eight in Thandwe Township; two in Taungup Township; and one each in Ponnagyun, Manaung and Gwa townships.

IDPs in Arakan State have complained that they lack access to real-time information about the pandemic due to the poor internet connection across several townships in the state. The Union government is deliberately throttling the internet in the affected townships, insisting that it is necessary to stymie coordination of anti-government forces in the region, which has been plagued by conflict between the military and the Arakan Army since December 2018.