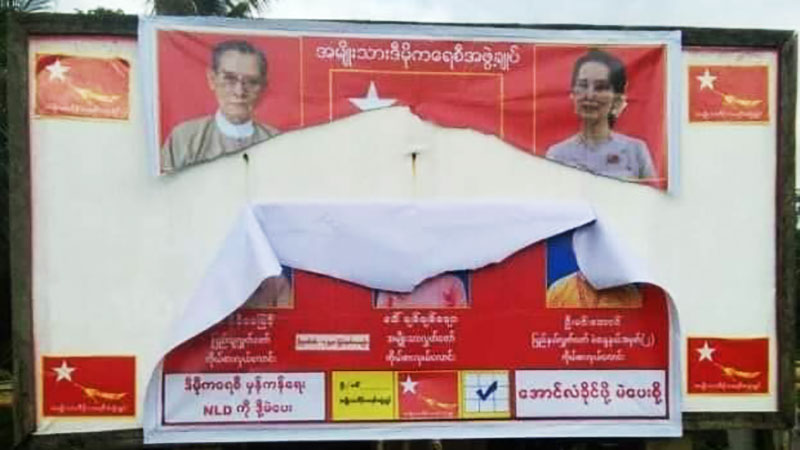 Campaign signboards for the National League for Democracy (NLD) in three Taungup Township villages were destroyed on September 25, according to township NLD members.

The vandalism marked the seventh time that election signboards for the ruling party have been destroyed in the early weeks of the official general election campaign period, which began on September 8.

U Min Aung, an NLD candidate contesting a seat in the Arakan State legislature representing Taungup’s constituency No. 2, said police should probe the incidents as cases have been opened at the relevant police stations to take action against those responsible for the election-related vandalism.

“An eyewitness said that two people wearing helmets and face masks destroyed a campaign signboard using a plastic pipe in Kyawkaing village,” he told DMG. “I would like to urge the police to investigate the case and take action against the perpetrators as quickly as possible.”

From September 12-20, NLD campaign signboards in Taungup Township’s Maei town and the villages of Chaung Thone Gwa, Nat Kan and Ywama were destroyed.

An NLD campaign signboard in Myaw Taw U village, Manaung Township, was destroyed on September 23.

Supporters of other political parties in Thandwe District have said they will likely stand guard near their parties’ campaign signboards to prevent them from also being destroyed.

The 2020 general election is slated for November 8.