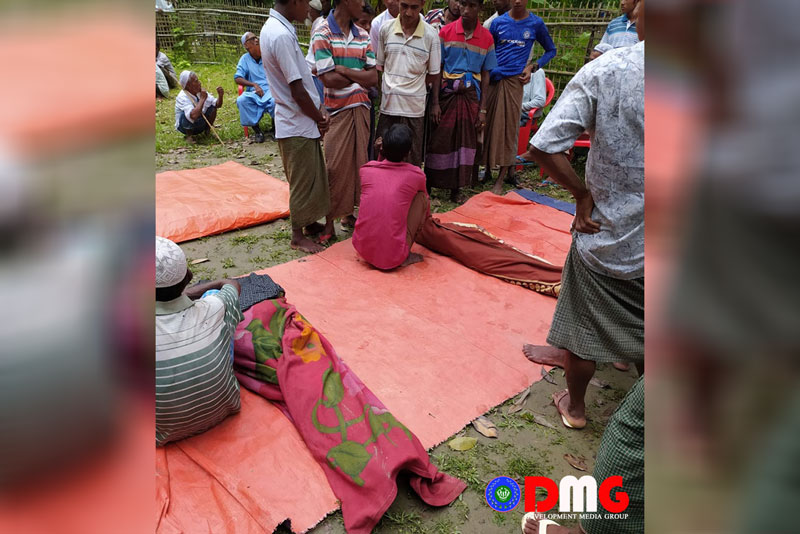 Two villagers were killed and another was seriously wounded in a clash involving the Tatmadaw and the Arakan Army (AA) about 1 mile from Pyin Shay (Muslim) village in Arakan State’s Buthidaung Township on October 5, locals said.

The civilian casualties were reported following hostilities between the Tatmadaw and the AA on Monday evening in the San Hnyin Wai village-tract, during which 14 villagers including some herdsmen from Pyin Shay (Muslim) village were taken by soldiers, said U Sawlein, a village in-charge.

“A military contingent entered the village and arrested 14 people on sight. Security personnel told the villagers to go in front of them,” he said, an apparent reference to the use of civilians as minesweepers. “The fighting broke out at a location about 1 mile from the village at around 4 p.m. As a result of the fighting, the arrestees fled and one person was injured. I think they were caught in the middle of the fighting.”

The surviving victim, a 30-year-old Muslim man, has been identified as Kalarfutier. He was sent to Buthidaung Hospital on October 5 having sustained gunshot wounds to his chest, abdomen and left arm, and his condition is considered life-threatening, said his father U Pyweyet.

“My son was hit by a bullet. I don't know if he was hit by a bullet because of the fighting between the two sides. He was taken to Buthidaung Hospital because his condition is critical. I don’t think we will be able to save his life,” he added.

Out of 14 residents taken by the military from Pyin Shay (Muslim), 12 ultimately returned to the village but two — namely Annatula, 12, and Annawa Husoung, 16 — did not. The two missing minors were found dead with multiple gunshot wounds on the morning of October 6, said village in-charge U Sawlein.

“The villagers searched for the two missing at around 7 a.m. on October 6 and the duo were found dead with multiple gunshot wounds near a small dam where clashes between the Tatmadaw and the Arakan Army erupted,” he said. “The township General Administration Department wants the corpses to be taken to the hospital for medical examination. The parents said the bodies will be buried in the village according to tradition.”

DMG attempted to contact Maj-Gen Zaw Min Tun of the Tatmadaw True News Information Team for comment on the villagers’ accusations, but he could not be reached.

U Shwe Hla Aung, the Buthidaung Township administrator, said: “I don’t know exactly as to whether Muslims were taken by the Tatmadaw or not. Fourteen people from Pyin Shay village were caught in the middle of fighting while catching fish at a location about 1 mile from their village. Two teenage boys were killed. The injured were to be airlifted to Sittwe via a military helicopter.”

Meanwhile, a shooting blamed on security personnel in Minbya Township on the night of October 5 killed three Muslims.