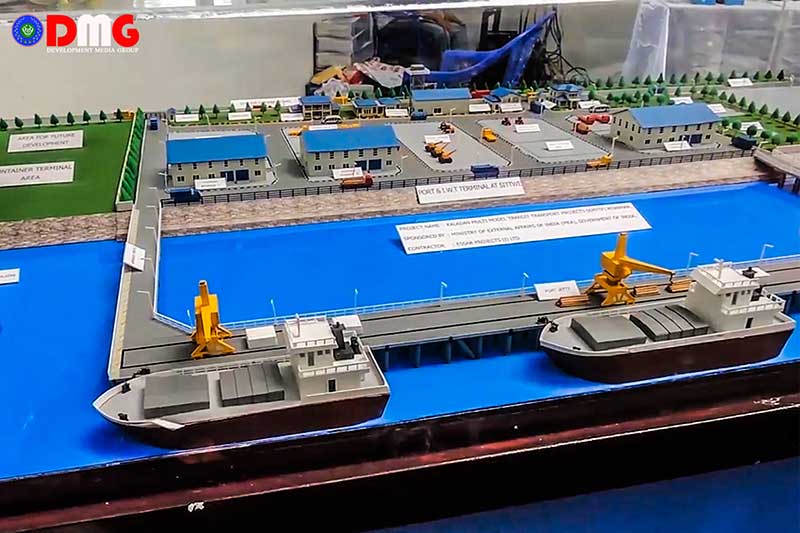 When it comes to the India-backed Kaladan Multi-Modal Transit Transport Project in Arakan and Chin states, it is necessary to clearly communicate its benefits to local people living in the project area, according to Ko Tin Oo, managing director of the Arakan Rivers Network.

At present only some project details have been articulated, and to most residents it is not clear how much the project will benefit local people or Arakan State, Ko Tin Oo added.

“It has not yet been explained to the public how the local people will benefit from this project, how much will be spent for the benefit of the people of Arakan State, and what measures have been taken to prevent environmental damage caused by the passage of ships,” he explained.

Ko Tin Oo claimed that throughout the project’s implementation thus far, the voices of local people in the affected area have not been taken into account, with a focus instead on completion of the project.

The Arakan Rivers Network pointed out that during construction of a Kaladan-related port in Sittwe, sand needed for the project was pumped from the mouth of the Kaladan River, causing flooding and landslides in nearby Thekhone village that submerged some homes.

“While the port was being built in Sittwe, dredging vessels came here to collect sand. The riverbank has been collapsing since the rains that year, and now about one-third of the village is gone. This year, the riverbank will continue to collapse in the rainy season,” said U Than Hlaing, the local village administrator.

“If something goes wrong with the implementation of a project in an area, the locals will be dissatisfied. We have to explain the project to the local people in advance. The local government should explain how to respond to the project-affected communities and how to make them comfortable in the long run,” he added.

Prior to the development of the Kaladan Multi-Modal Transit Transport Project, its pros and cons should be carefully studied and explained to the public, U Zaw Lin said.

“The Kaladan project needs to be clearly explained to the local people; how much it will benefit Arakan State and its people. No matter how well you do it, you need to explain it carefully or you may end up with problems later,” he said.

Asked about the project details, Arakan State Minister for Finance, Revenue, Planning and Economy U Kyaw Aye Thein told DMG to contact the Myanma Port Authority, under the union-level Ministry of Transport and Communications.

Port and inland water transport terminals have been built in Sittwe and Paletwa, and an agreement was signed to complete the project by 2020, but it has been put on hold due to fighting between the Tatmadaw and the Arakan Army (AA), said U Soe Htet, the Chin State minister for Municipal Affairs.

“Due to the fighting between the Tatmadaw and Arakan Army, the project was temporarily suspended. Road construction has been put on hold due to the coronavirus epidemic and unrest in the area,” U Soe Htet said.

Myanmar and India signed a bilateral agreement in 2008 to connect the port and inland water transport terminals in Sittwe and Paletwa to the northeastern Indian state of Mizoram, also linking from Sittwe to the port city of Kolkata in “mainland” India.

The US$484 million project, which is being funded by India, will include two major land and sea routes: a waterway from Sittwe to Paletwa and a road link from Paletwa to Mizoram.

Construction of the road from Paletwa to Zorinpui in Mizoram has been impeded by the region’s precarious security situation, the Indian ambassador to Myanmar told media on January 21.

He expressed hope that the project would garner the support and participation of both political parties and relevant governmental departments.

The Indian government says once completed, the Kaladan Multi-Modal Transit Transport Project will facilitate connectivity between the port in Sittwe and Mizoram State, contributing to trade and commerce between Arakan State and northeast India.

The speaker of the Arakan State Parliament, U San Kyaw Hla, met Gautam Kumar Pandey, the consul general of the Indian Consulate in Sittwe, on November 30 and discussed aid for IDPs and timely implementation of the Kaladan project.