Victim of landmine from Paletwa being treated at Sittwe General Hospital 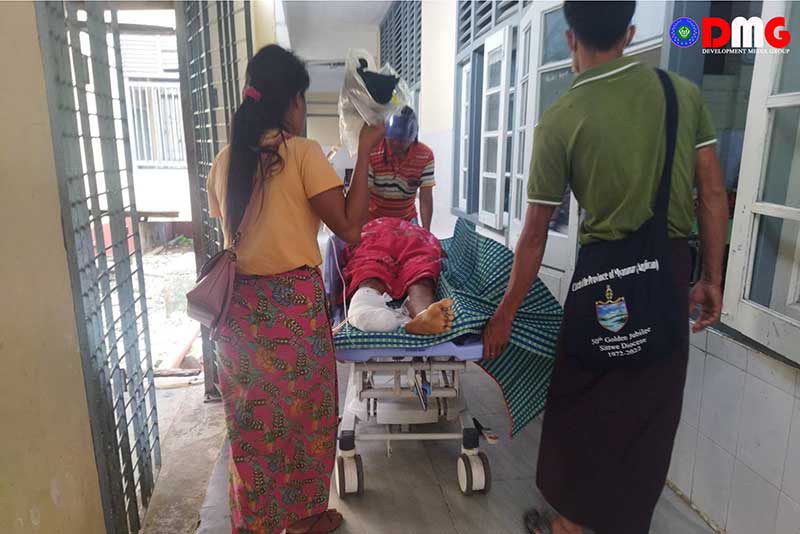 One of two women from a camp for internally displaced people (IDPs) in Paletwa Township, Chin State, who were injured in a landmine blast, has been admitted to Sittwe General Hospital and her condition is considered life-threatening, according to family members.

The two displaced women were injured after encountering the landmine at a location between Abaung Thar and Takarchaung villages on June 20.

Daw Win Khin, 38, lost her right leg in the landmine explosion, while Daw Chay Khin in her 50s sustained minor injuries to her right arm and her condition is not considered life-threatening. Daw Win Khin was transferred to Sittwe General Hospital due to severe injuries, family members said.

“She lost her right leg in the landmine blast and sustained injuries to her left arm and face. She was transferred to Sittwe General Hospital from Paletwa Hospital,” Ko Hway Myint, son-in-law of the victim, told DMG.

The emergency patient [Daw Win Khin] was taken to Kyauktaw from Paletwa by boat and was transferred to Sittwe General Hospital by an ambulance owned by a local charity in Kyauktaw.

“She is currently being treated at the emergency department at Sittwe General Hospital as her condition is considered life-threatening,” he explained.

The displaced people in Paletwa are forced to work odd-jobs due to food shortages and have to travel to the jungle to collect vegetables, fearing the dangers of landmines, according to local IDPs.

“We are worried about the danger of landmines. Now the displaced people are in crisis, so I have to go everywhere to work. Therefore, I want the authorities to clear landmines near the forest. There were frequent casualties from landmine blasts in the past,” said U Ni Hla Aung, manager of a displacement camp.

The Myanmar military and the Arakan Army (AA) fought fiercely in Paletwa Township in the past, leaving landmines and explosive remnants of war (ERWs) in the jungles and elsewhere. There have been frequent landmine explosions in which neither of the previously warring parties accepts responsibility.

At least 56 people were killed and 134 others were injured in landmine and explosive remnant of war (ERW) encounters during some two years of fighting between the Myanmar military and Arakan Army in Arakan State from 2018-2020, according to the Rakhine Ethnics Congress.