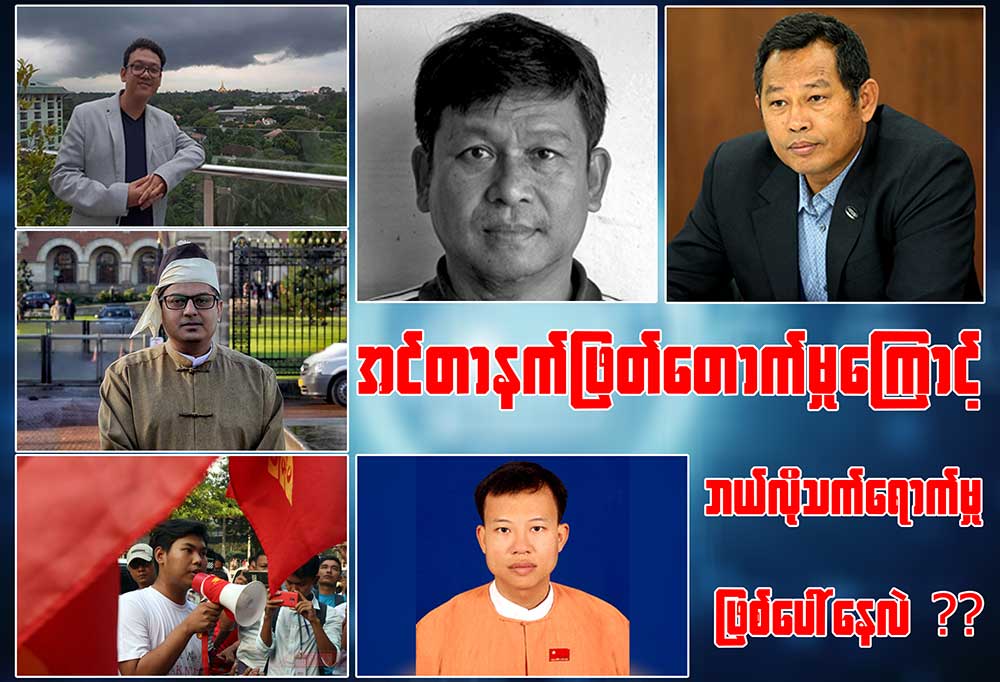 On June 21 last year, the Myanmar government cut off mobile internet access in eight Arakan State townships and Chin State’s Paletwa Township. With the internet blackout now in its ninth month, DMG interviewed human rights campaigners, civil society activists and a member of Parliament about how the shutdown has impacted the daily lives of people in the affected townships. Because many of those townships are also considered conflict zones, the human rights implications of the internet blackout was top of mind for several of the interviewees.

The interviews were compiled by freelance reporter Khaing Myat Naing, and edited for length and clarity. Some of those DMG spoke to used the word “Rohingya” but in its place “Muslim” has been used after receiving approval from individual interviewees, in accordance with DMG’s editorial policy.

It seems like the government’s internet shutdown is for the military’s sake. Cutting off internet access makes people blind. The government is deliberately obstructing our freedom of expression and rights.

It is like the government has hushed up what Tatmadaw troops have done to Arakanese people. For example, students from a school in Buthidaung Township were injured by an artillery shell fired by the Tatmadaw. People cannot access such information in a timely manner due to the internet shutdown.

Maybe the government wants to cover up what the Burmese Tatmadaw has done to Muslims. It is like not only the Muslim community but also the Arakanese community in Arakan State are being threatened now.

The Arakan Army issued a statement saying there are human rights violations being committed by the Tatmadaw. And there are statements that describe AA as having GPS locations of mass graves. The internet shutdown was imposed after AA said that it would share these GPS locations of mass graves if international human rights groups, the UN and ICJ want them.

Another point to consider is fierce fighting between the Tatmadaw and AA in Arakan State. The internet blackout was imposed before the Tatmadaw carried out offensive attacks on the AA. We have seen that the Tatmadaw has attacked AA using helicopters, aircrafts and drones after the internet shutdown.

Human rights violations and collateral damage are common during offensive wars. The offensive operation is more intense due to the internet blackout. So, it affects both Arakanese and Muslim people from that area.

The Myanmar Tatmadaw can commit more human rights violations against Muslims in Arakan during the fight with the AA. It seems to me that by cutting off internet access, some information can be blocked and it is difficult for the international community to receive information.

The AA said it found that the Myanmar Tatmadaw has incited racial and religious conflict. Thus, cutting off internet access results in a lack of information between people from different races and religions, and enhances suspicions among them if something happens that could lead to a conflict.

If the internet is not cut off, we can know whether armed groups are abiding by procedures, duties and responsibilities during the fighting. When there is no internet access, the possibility of committing human rights violations against civilians increases. It can be said that the government has done what should not be done. It will lead to a situation where the Myanmar Tatmadaw can commit human rights violations freely in conflict-affected areas if it wants to. That’s why the Myanmar government needs to restore internet access quickly in Arakan State.

Nowadays, the internet is a basic need for everyone. It is used not only for getting news but also widely used for receiving healthcare knowledge, to access education, obtain information for businesses, and in social relations.

Cutting internet access by citing security reasons is cutting an essential, basic need of everyone. It is not a concrete reason because government entities can control internet content and it can conduct surveillance on confidential information.

Other countries do this. But they do not make people face difficulty by blocking internet access [entirely]. Another of the biggest difficulties is that people won’t know the human rights violations committed by the Tatmadaw in real time.
All communities in Arakan State have faced human rights violations committed by the Tatmadaw. We’re worried that these violations will increase severely due to the internet blackout.

Only our Arakan State has had internet access cut off while other regions in the country can access it freely, and it is a violation of fundamental human rights. Because the internet is a basic need for everyone, everyone has a fundamental right to access the internet.

I want to say that the fundamental rights of the people in Arakan State have been violated. I want to ask the government to restore internet in all these townships. People from the whole country deserve to have equal rights.

During such unrest, the military cut telephone lines and power. So, the internet ban now, in order to impose a news blackout, is an attempt to commit a crime.

Now we need to know who imposed the internet ban; the Tatmadaw, or the National League for Democracy government, or both?
It is certain that the internet ban is an attempt to commit a crime, whoever has done it.

An attempt to cut off contact between people in order to stop them from providing aid to each other or to disrupt information access among family members wanting to know what is happening is a war crime.

The mobile operators are also responsible, although they have to do as they are told by the government. They cannot give an excuse that they are just doing their business and they are not involved in political affairs. They are accountable to criminal responsibility. The world needs to know it.

We saw the international community release statements over the internet ban. I think the EU, UN agencies and UN Information Centers need to push Myanmar to restore internet in the region. The Ministry of Communications and Information Technology, which is managing the mobile operators, is not under the management of Senior-General Min Aung Hlaing.

It is a ministry under the management of Daw Aung San Suu Kyi, so she is 100 percent responsible. She cannot give an excuse on the internet ban by saying it was not her business. We cannot blame the military only.

Cutting off communications and internet has always been done under successive dictatorships. If a war broke out, there would be violations of human rights and IDPs in the conflict-affected area. These situations should be shown to the international community openly and honestly. Although evidence is recorded about these situations, it would be difficult to show them internationally if there is no internet.

What I want to suggest to the government is that it should immediately give free information access to the media if it wants to protect human rights and ethnic nationals’ rights in line with international standards. I want the government to restore the internet in the affected areas. The internet ban is solely the responsibility of the government, not the Tatmadaw.

So, international companies should know about it. Prestigious businesses never invest in a country under dictatorship. I think European companies should not do their business under such an oppressive administration because their good name and image would be harmed.

Regarding the internet ban, lawmakers in Arakan State tried to submit a proposal to the parliament, but it was unsuccessful. The government should equally treat all regions in the country.