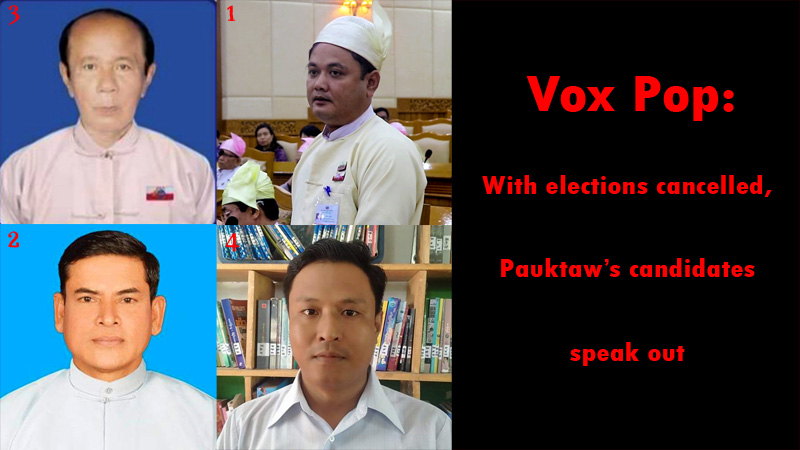 Myanmar’s Union Election Commission announced on October 16 that nine entire Arakan State townships, as well as 15 wards and 137 village-tracts in four other townships across the state, would not hold elections this year.

The cancellation of voting throughout Pauktaw Township has come under particular fire, with critics saying the conflict affecting other parts of Arakan State is not a concern in Pauktaw. More than 110,000 eligible voters in Pauktaw Township will lose their right to cast ballots and 13 candidates have lost the chance to contest elections in the township.

DMG compiled the opinions of some of the candidates who had prepared to compete for seats in Pauktaw Township, only to be told of the nixed polls earlier this month.

I was surprised to see the announcement of the UEC because Pauktaw Township has heard not a single gunshot since independence more than 70 years ago, let alone during the current fighting. I’d like to say the UEC’s decision is entirely wrong to not hold elections in such a peaceful township.

The main thing is northern Arakan State will not hold elections, including our Pauktaw. And some parts of Ann and Taungup townships will not have elections. So, eligible voters in these areas will lose their right to choose their own representatives in the election, which happens only once every five years.

During this time of fighting currently, the government should be expanding the political space by focusing on and giving priority to national reconciliation and internal peace — and holding elections, which can give a lot of political legitimacy.

In a situation requiring the development of a democratic political culture, people’s representation and political parties, the cancellation of elections in the places where Arakanese political parties have dominated and won in successive eras is like castration. The hardest hit are Arakan’s people.

Holding elections in a place like Paletwa Township — where fighting is intense — and not holding in a place like Pauktaw Township — where there has not been fighting — is not an honest act, the way I see it. Was it an announcement based on wrong information? If so, the UEC should, as soon as possible, make an announcement in order to be able to hold the election in our township in time.

The right to vote is the right of all citizens. The UEC’s decision causes the people from the townships with no elections to suffer grievances beyond measure. There is no security. So, just saying ‘unable to hold elections’ is not a sufficient answer for Arakanese people. A solution should be reached after consultation with political parties and other organisations. If possible, other townships not holding elections should be reviewed. There is no fighting in our Pauktaw Township. If the UEC is going to hold elections [in Pauktaw], it should quickly arrange to be able to hold them in time.

When the NLD [National League for Democracy] government won office in 2015, our ANP won enough to form a [state] government. However, we have not been allowed to do so. And now in 2020, we are not even getting the right to contend in the election. It is said that Daw Aung San Suu Kyi’s party is walking the path of democracy. What I see is an attempt to terminate democracy.

In Pauktaw, we have encouraged the people to vote. People were saddened when they realised they would not be able to cast ballots. Another concern is: At a time when killing can be done at will and arrests can be made at will, who will now be speaking for the people when representatives will not be there?

We think the 2020 election is a time that requires more than ever that the people choose their representatives by their own will; more so than the times back in 2010 and 2015. At the moment, Arakan State is the place where the worst war is raging. More than 300 civilians have died from the time the fighting started in 2018 to 2020. Now is the time the grievances and sufferings of people need to be reported with urgency — to Myanmar internally, or to the world — through people’s representatives. There have been many grievances.