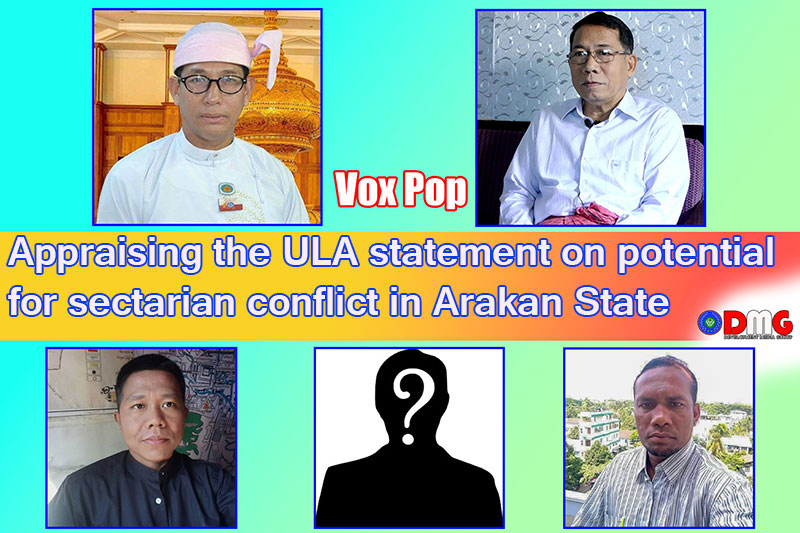 In a statement on December 17, the United League of Arakan (ULA) — the Arakan Army’s political wing — said that some townships in Arakan State had experienced a “series of extraordinary events” this month that it warned could lead to sectarian conflict. How do the different ethnic groups in Arakan State view the ULA’s statement? To find out, DMG interviewed people in Arakan State from both the Arakanese and Muslim communities, which have been in conflict in the past.

Successive governments have created such ethnic conflicts. There is no denying that the Arakan Army should now be careful not to provoke sectarian strife, especially as successive governments have been creating sectarian strife to get them where they want to go. This is a time to think, as trust between the two communities is building in Arakan State. At the moment, we hear unwanted complaints in Arakan State.

Recently, an ethnic affairs minister recruited Rakhine women to wear traditional Khami costumes during a performance by Khami women, which could escalate tensions between the two ethnic groups.

In the past, there was a lot of fear about ethnic conflicts. Now I’m worried, but not as much as before. Because what they do proves that the Arakan Army has the ability to do a lot of things. The Arakan Army believes that it can resolve conflicts. We, Arakanese people, need to unite in the cause.

Mosques were set ablaze [in past sectarian conflict]. I really like the ULA/AA statement because I have experienced similar problems. With this information, you can think for yourself and never make a mistake again. Myanmar has been ruled by successive military and democratic governments. Under former President U Thein Sein’s government, there were many ethnic clashes. There were ethnic clashes during the NLD [National League for Democracy] government. It is clear who is attacking the people born in Arakan State.

Arakan State is the most stable state in Myanmar and the Arakanese people are proud of that. Almost all other ethnic groups envy the stability of Arakan State. We consider it an honor for the ULA/AA to stabilise our region. They are also patiently controlling the Myanmar military to prevent war. It also shows that they are negotiating. Some forces do not seem to like it very much. Like elsewhere, there are forces in Arakan State. The Arakan Army’s statement is a good thing. It’s a good thing for the ULA/AA to issue such a statement so that the situation does not spread like in 2012 and 2017.

The relevant local government authorities should issue a similar statement. In short, there should be no racial tensions in the current situation. The Arakanese people should not listen to any urges. Muslims should not be involved in such a situation if they want to see a stable and peaceful Arakan State in the future. Therefore, the ULA/AA statement is a good appeal to the people for peace in Arakan State in the future. Muslims also want to understand. The stable condition of Arakan State requires working with the ULA/AA to prevent further sectarian and religious conflicts between the various ethnic groups living in Arakan State.

There was harmony among all ethnic groups and all economic, social and educational conditions were normal before the riots in Buthidaung Township. After the 2010 election, people from other areas came to Buthidaung Township to campaign for elections. Then, due to misunderstandings between Arakanese and Muslims, the 2012 and 2016-17 conflicts took place. Now it is back to normal.

Now we see missionaries from Myanmar doing religious work. There are also people who have returned to northern Arakan State from mainland Myanmar, both legally and illegally, for various reasons. In some places, religious schools have been set on fire in Arakan State. So, the Muslims here are worried as well as the Arakanese people. We are very worried in such a situation that we might be affected by conflict like in 2012 and 2017. We all need to be careful not to cause problems. Now it’s good that the Arakan Army informed the Arakanese people about the possibility of racial conflicts in advance. It is a good idea that either the government or other organisations notified the people in advance.

I welcome the ULA/AA statement because Arakanese people really need it. The Arakanese people have become aware of racial conflict. There has been no conflict between Arakanese and Muslims in Arakan State in the past. Behind the scenes are groups that deliberately create religious and ethnic conflicts. Even now, I think it would be a good idea to put it [the statement] out there as a cautionary tale. The rising tide of national politics in Arakan State may be deliberately creating conflict.

In any case, no matter what they do, the Arakan political awareness is gaining momentum. Therefore, such conflicts are not likely to happen in a simple way. We should work for peace and for how the country can move forward instead of fighting one group at a time. We should work together to build a peaceful country instead of creating problems by forming factions. People should not do things that are hostile.