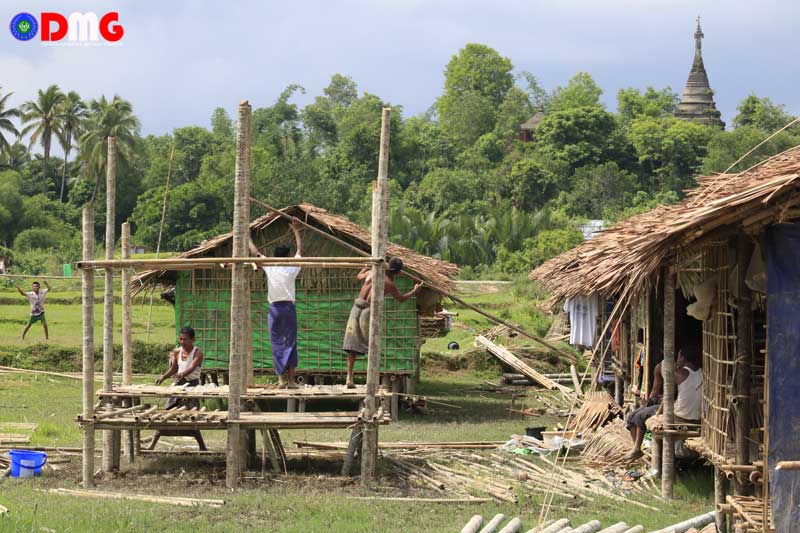 The state government has ordered that no new camps for internally displaced people (IDPs) be set up in six Arakan State townships, members of the regional Hluttaw said.

U Tun Thar Sein, a lawmaker representing Mrauk-U Township, said the order was promulgated on February 5, stipulating that new camps were not to be established in Kyauktaw, Mrauk-U, Minbya, Buthidaung, Rathedaung and Myebon townships.

“The township administrator said that no new camp is allowed to be set up. I wasn’t told directly. What he means is that people can stay at existing camps, but new ones cannot be built,” he said.

U Hla Thein Aung, a Minbya Township parliamentarian in the state legislature, said the new order meant that the government would not recognise people living in IDP camps that were built without government approval.

“According to them [the government], I assume they won’t recognise the people living in the camps in the village areas without having their approval. It means that they won’t provide any assistance to them,” he said.

MP U Maung Kyaw Zan from Buthidaung Township said the government’s recently decreed restriction would cause problems among the state’s displaced populations.

“It is impossible for IDPs to accept this. They will have to stay at these camps if they don’t have any stipend. The government isn’t able to provide fully. There are thousands of IDPs. But they [the government] just built a few hundred rooms [for IDPs],” he said.

DMG contacted U Win Myint, spokesperson for the Arakan State government, to ask about the recent order affecting new IDP settlements, but he referred the inquiring to Colonel Min Than, state minister for security and border affairs. The minister did not answer a subsequent phone call to his number.

The state government has set up some displacement camps but many IDPs have opted not to relocate to those camps, saying the temporary settlements were far from their home villages.

Last month, the Tatmadaw ordered inhabitants of the Sa Nyin IDP camp in Myebon Township to move to a new site, saying the existing camp’s location was too close to a conflict zone. Soldiers from the Arakan Army were said to pass in and out of the camp disguised as civilian IDPs.

More than 300 people living at the Sa Nyin camp, as well as at several other IDP settlements across Arakan State, face hardships related to lack of food, shelter, education and healthcare, among other day-to-day livelihood concerns.