Girl severely wounded in school shelling to be transferred to Yangon 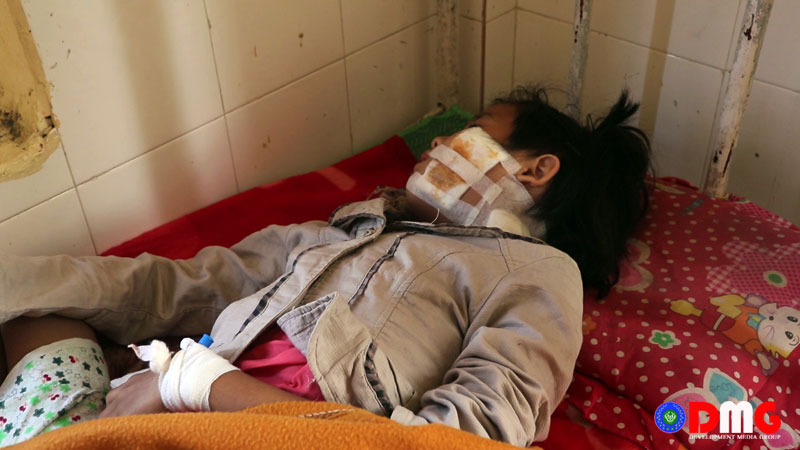 One of the 21 students injured when an artillery shell hit a village school in Arakan State’s Buthidaung Township last week will be transferred to Yangon General Hospital to undergo jaw reconstructive surgery, a local administrator told DMG.

“She was brought to Sittwe just this morning along Ah Ngu Maw Road. Everything was arranged by the hospitals,” U Shwe Hla Aung, the Buthidaung Township administrator, said on February 15. “Buthidaung Hospital transferred her to Sittwe Hospital, and Sittwe Hospital is going to transfer her to Yangon General Hospital.”

U Than Maung, Ma Khin May Oo’s father, confirmed that his daughter was currently at the hospital in Sittwe and said the family was struggling with the financial burden brought on by her ordeal.

“We have financial difficulties. We brought K200,000 [US$133] with us. My sister and brother accompanied me here to Sittwe. So we are a group of four people here, including my daughter,” he said.

A total of 21 students were injured when the artillery shell hit the school in Khami Chaung village at around 10 a.m. on February 13. Ma Khin May Oo was one of two students who suffered severe injuries. The remaining students are feeling better, according to residents.

Both the Tatmadaw and the Arakan Army(AA) denied responsibility for the shelling, but that has done little to tamp down an outcry against both groups.

International organisations, embassies and local CSOs have issued statements expressing condolences for the children and their families, and pointedly criticizing the warring parties’ actions.

“I would like to request both the Tatmadaw and the AA not to attack by targeting children,” said U Than Maung.

Fighting between the Tatmadaw and Arakan Army has intensified across multiple townships in Arakan State in recent weeks, bringing an attendant rise in civilian casualties.