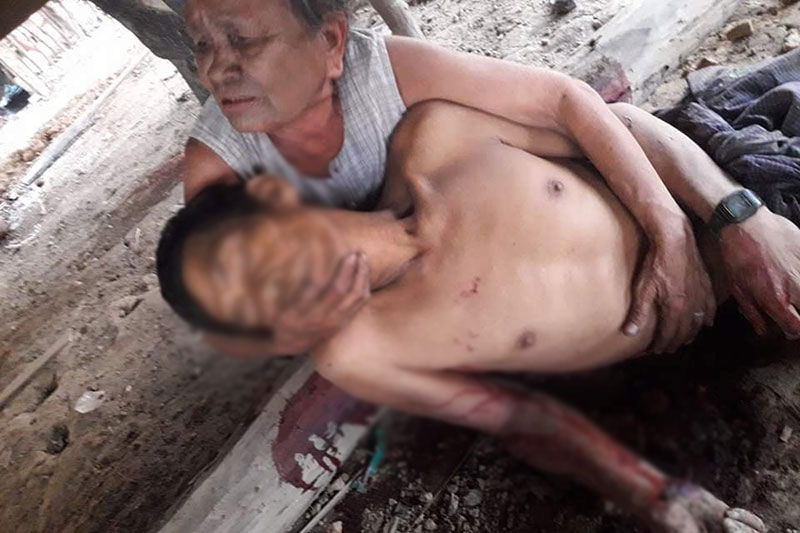 Aerial munitions hit May Lun and Chaung Net (Chin) villages in Minbya Township at about 4 p.m. on March 30, killing two civilians and injuring two others, said lawmaker U Hla Aung Nyunt, who represents the township in the Arakan State legislature.

U Hla Aung Nyunt said the casualties were the result of airstrikes. Regarding the hostile fire, DMG phoned Colonel Win Zaw Oo, spokesperson for the military’s Western Command, and Brig-Gen Zaw Min Tun, secretary of the Tatmadaw True News Information Team, but they could not be reached for comment.

Sixteen-year-old Maung Nyi Myint Lwin from May Lun village was killed and his father U Aung Kyaw Sein, 55, and mother Daw Ma Khin Tint, 54, were injured.

The incident occurred while the three were having dinner at their home, said a local who asked not to be identified for security reasons.

“Two Tatmadaw fighter jets opened fire on our village at about 4 p.m. yesterday. They were hit while having their lunch. The son died at the scene. His parents were injured. No fighting occurred yesterday,” the source said.

Both U Aung Kyaw Sein and Daw Ma Khin Tint were taken to Minbya Hospital, where they have been receiving medical treatment.

Meanwhile U Maung Than Sein, a 51-year-old ethnic Chin man from Chaung Net (Chin) village, was also reportedly killed in airstrikes conducted by the Tatmadaw..

“He was sitting at our house when airstrikes happened,” said U Win Maung, the younger brother of the victim. “We heard the sound of gunfire. Then, he was hit in the back while he rushed toward a bomb shelter and died. The roofs of other houses were also damaged.”

Amid ongoing clashes between the Tatmadaw and Arakan Army (AA), the civilian casualty count continues to rise in Arakan State, with dozens killed and injured in recent months.