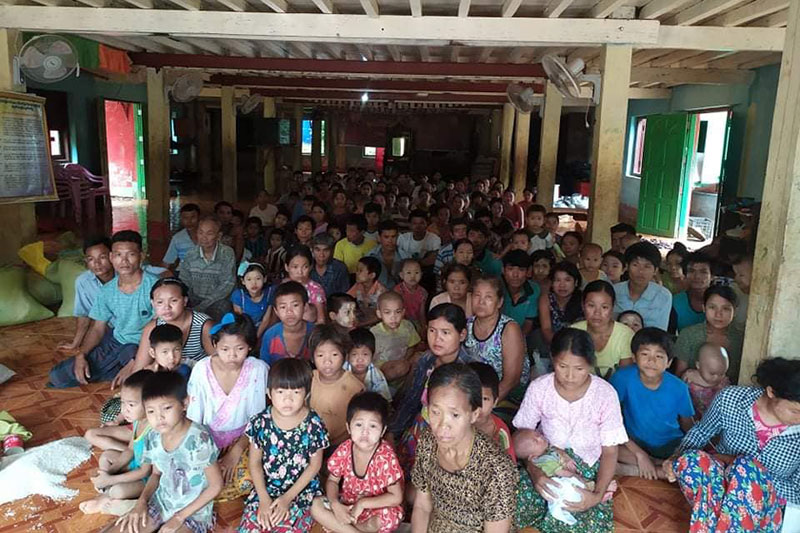 With more war refugees arriving in recent weeks at two camps for internally displaced people (IDPs) in Ann town, Arakan State, additional shelters are needed, according to managers of the camps.

People from more than 20 villages fled to the town after hearing word that the military would conduct “clearance operations” in Ann Township’s Darlet village-tract, residents said.

The new arrivals at the No. 1 camp have been given temporary tarpaulin shelter, but they will be troubled if subject to heavy rains, said U Than Shwe, chair of the management committee of the camp.

“We need more than 20 shelters. And we also need more food,” he told DMG.

More than 300 IDPs were taking shelter at the No. 1 camp previously, but another 300 IDPs arrived at the camp after June 26, the manager of the camp said.

Since June 28, meanwhile, more than 600 people have joined the No. 2 camp and over 70 shelters are required for the new arrivals, said Ko Soe Thein, chair of the camp management committee.

“We arranged a place for new arrivals at the hall. It is crowded and not convenient for people to sleep,” he said.

More than 4,000 people fled their homes in the Darlet village-tract in recent weeks, but about 3,000 of them are taking shelter at relatives’ homes in Ann town, said Ko Myo Lwin, who is providing aid to the IDPs.

“Some people rent houses in the wards of the town,” he said.

U Win Zaw, who fled from Dalet Chaung village, said: “We are worried for our health at the moment. We did not stay at the camp because it is crowded. Although we are staying outside the camp, we are facing difficulties for food.”