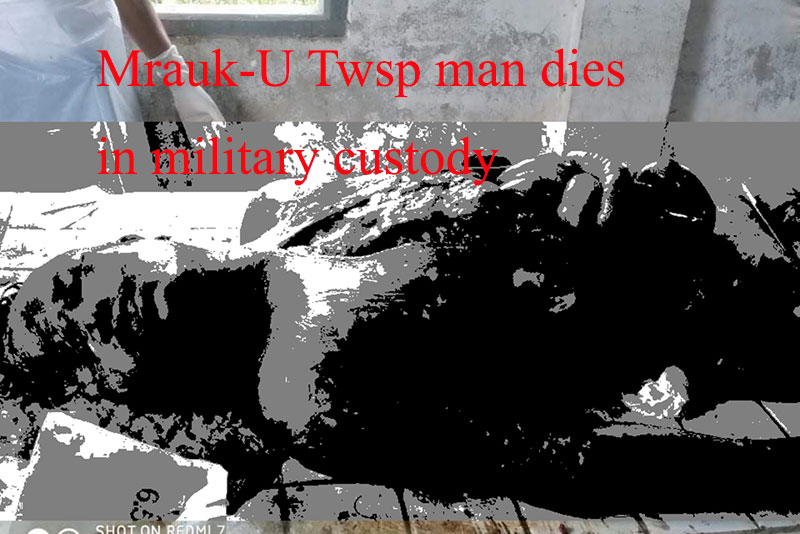 A resident of Pazun Phay village in Arakan State’s Mrauk-U Township has died in military custody, according to family members of the man.

U San Shwe Hlaing, 41, was arrested by security personnel from the military’s Light Infantry Battalion No. 377 at about 5 p.m. on August 7 while returning to Pazun Phay village from downtown Mrauk-U after attending his elder brother’s funeral, family members said.

Three days later, U San Shwe Hlaing’s dead body was produced by Light Infantry Battalion No. 377 due to a request made by the Mrauk-U police station, said U Maung Pein, vice chairman of the Mrauk-U Funeral Service.

“Security members closed the doors when we arrived at the Light Infantry regiment. We waited for the body until 4 p.m. Security personnel brought the dead body and put it on the ambulance. The body of the victim was rotting,” he said.

The Mrauk-U Funeral Service then transported the corpse to Mrauk-U Hospital for medical examination.

“The body of the victim was decomposed because he may have been killed three days ago,” said Daw Ma Pu Chay, U San Shwe Hlaing’s younger sister.

The Tatmadaw acknowledged on August 10 that its battalion in Mrauk-U Township had detained a 41-year-old man by the name of U San Shwe Hlaing. The military’s statement said the man attempted to open a gate of the battalion base on August 7. Security members fired a warning shot as the man, who was later arrested, didn’t reply and fled the scene.

According to an initial interrogation, the detainee was a fighter from the Arakan Army, the military said. But family members of the victim refuted that accusation, saying he had no links to the ethnic armed group.

“The victim didn’t go near the military regiment. He was beaten and taken by security personnel. We have many eyewitnesses,” Daw Ma Pu Chay said, calling the military’s narrative “fabricated.”

DMG attempted to contact Brig-Gen Zaw Min Tun of the Tatmadaw True News Information Team seeking comment on the death of U San Shwe Hlaing in military custody, but he could not be reached.

“This is not only a lawless murder but also a war crime,” said U Zaw Zaw Min, a higher grade pleader with the Arakan Human Rights Defenders and Promoters Association. “The military must be held accountable because the detainee died in detention.”

The military is responsible for taking action against human rights abusers in accordance with military or civilian law, he added.

Grisly deaths blamed on the military have been all-too-frequent occurrences since conflict between the Tatmadaw and the Arakan Army first began to escalate in early 2019. Last month, a man from Chainkharli village in Rathedaung Township was shot dead and his body was dumped in a latrine near his home. Also in July, U Kyaw Hlaing met a similarly gruesome fate, with the dismembered remains of the Kyauktaw Township resident found along the banks of the Kaladan River.

There have also been a number of deaths in Arakan State linked to interrogations while in military custody.