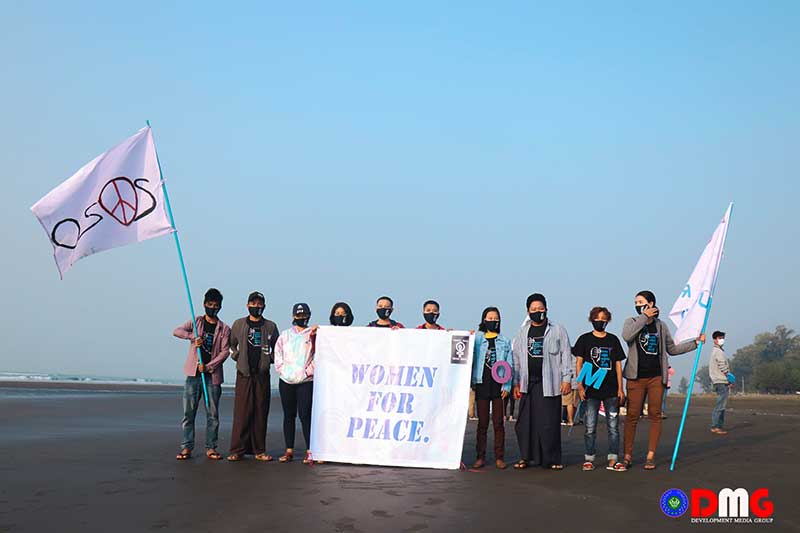 Women’s rights activists have called on the government to redouble its efforts to combat violence against women and do justice for victims of violence.

Activists marched from the BXT Jetty along Shukhinthar Street to Sittwe Hotel, holding placards that called for greater efforts to end violence against women.

“Women are suffering a lot of gender-based violence amid conflict in Arakan State. We want such forms of violence to be eradicated. The government is especially responsible for it. It appears so far that the government has not handled the issue,” she said.

The government must take responsibility for the security and peace of women in order to tackle violence against women, said the chairperson of the Rakhaing Women’s Initiative Organization (RWIO), Saw San Nyein Thu.

“There is the government, general administration departments and the judicial sector that are responsible for the security and peace of women,” she said. “They have to educate [the public] to prevent violence [against women]. And they must also hold the perpetrators accountable in line with the law to do justice for female victims.”

According to the RWIO, many women and girls lack security even at their homes. They are subject to detention by Myanmar’s military and are at risk of sexual abuse while fleeing clashes or living in displacement camps in Arakan State.

In cases of violence at IDP camps, it is difficult for women to receive medical treatment as often there are no clinics or hospitals nearby, said Saw San Nyein Thu.

“It is important that there are hospitals and clinics at displacement camps so that female victims can receive the healthcare they need,” she added.

On November 29, three men gang-raped a 12-year-old girl at a Muslim displacement camp in Pauktaw Township, with a police manhunt for the suspects ongoing.