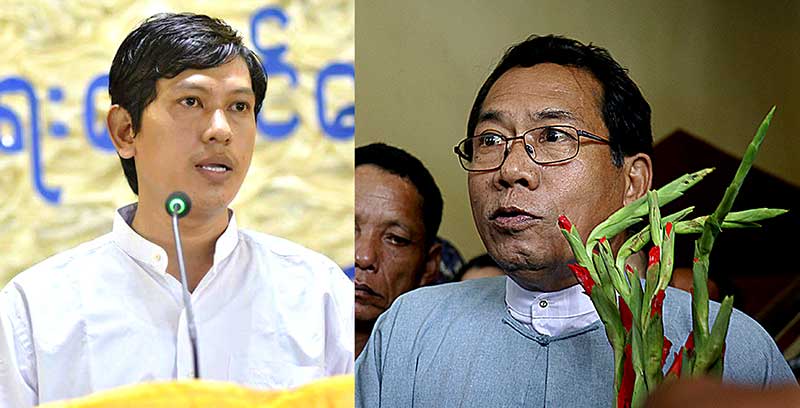 In March 2019, Dr. Aye Maung and Wai Hun Aung were sentenced to 20 years in prison for high treason under Article 122 of the Penal Code, and faced another two years for sedition under Article 505, to be served concurrently.

The men were arrested in January 2018 over remarks they made earlier that month at an event in Rathedaung Township commemorating the 233rd anniversary of the Arakan kingdom’s fall to the Burmese in 1785.

In January 2020, the pair lost a special appeal to the Union Supreme Court. They have been behind bars for more than 18 months in Yangon’s Insein Prison.

Arakanese communities have repeatedly called for the release of Dr. Aye Maung and Wai Hun Aung, but the former elected government of the National League for Democracy only turned a deaf ear, she added.

Former Arakan State lawmaker U Kyaw Lwin of Kyaukphyu Township predicted that the military would release the duo because the new regime would attempt to get some credit after seizing power in the February 1 coup.

“I don’t think the military would repeat what it did after the 1988 coup. The military needs to correct the mistakes made by the NLD,” he said.

“The internet was shut down in nine townships in Arakan [under the NLD government]. The Tatmadaw [government] came to power and lifted the internet ban. Considering this, the military is likely to be heading in a positive direction. It is important that it wins public support.”

He added: “The reason we believe the two will be released is because popular protests against the military are only taking place in Bamar-majority areas, and there are fewer protests in ethnic states. So, it appears that the Tatmadaw has to rally the support of ethnic people. It should release Dr. Aye Maung and Wai Hun Aung if it is to solicit the support of Arakanese people.”

In a statement on February 6, the Arakan Front Party (AFP) said its vice chairman had written to Senior-General Min Aung Hlaing, who heads the junta’s State Administration Council, asking for the granting of amnesty and release of Dr. Aye Maung.

AFP officials told DMG that they were hopeful of prospects for the release of Dr. Aye Maung and Wai Hun Aung, given the Tatmadaw’s desire to reduce political tensions in ethnic areas.

Saturday’s statement said the release of all political prisoners, including Dr. Aye Maung, is a constant demand of the AFP.