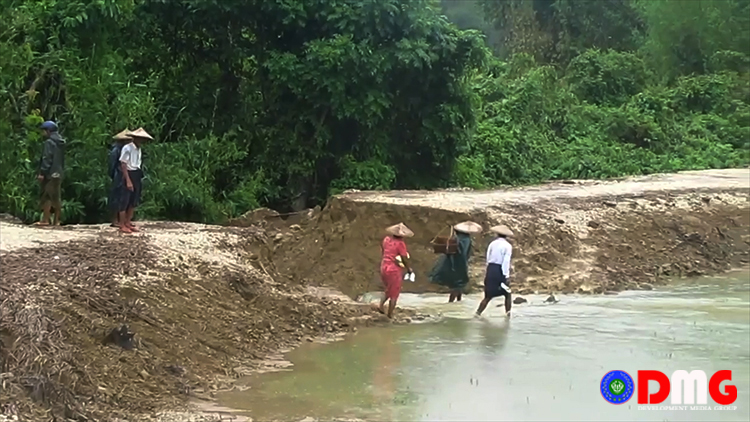 Recent heavy rains in Kyauk Phyu Township wiped out a road connection between Kalaba and Pyin Shay villages, so students and villagers are facing transportation troubles.

Local residents accused authorities of negligence regarding the destruction of the road. U Kyaw Hla Tun from Kalaba villge said that they requested the road construction company and department of Rural Development to build a small bridge on the road to lessen the flow of water, but it was not built and the road was destroyed after heavy rains set in.

“People from the Road Construction Company and the Department of Rural Development said they would inspect the damaged area today, but they did not show up. The road is wrecked as you can all plainly see,” he said.

An officer from the Department of Rural Development in Kyauk Phyu district said that the department will arrange for small vehicles to operate for the general public’s use on the road for now.

“Two big bridges are under construction in the area. We can build small bridges on the village road later,” the officer said regarding the small bridge to quell the flow water under the road.

Aung Min Myat Company build the dirt road and it was accomplished at the end of May this year. It’s about one mile long and cost K48.951million.