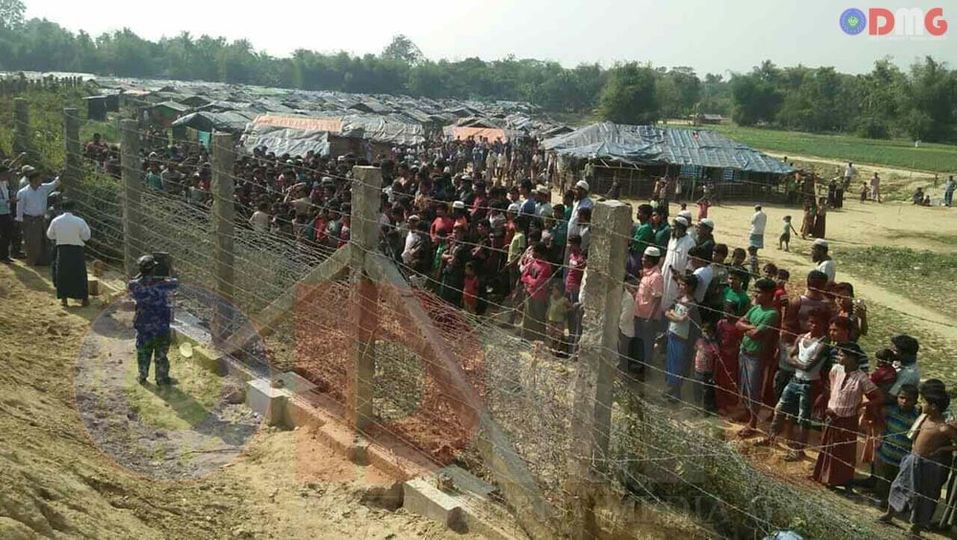 One of 19 Muslims in Maungdaw Township who entered Arakan State illegally from Bangladesh was found to have been infected with coronavirus, according to a source from the Maungdaw District People’s Hospital.

The person has been identified as 36-year-old Mamat Taw Yup from the Balukhali refugee camp in Bangladesh. He tested positive for the virus on June 10, according to the medical superintendent of the Maungdaw District People’s Hospital, Dr. Nu Kay Thi San.

“A 36-year-old Muslim man was diagnosed with the deadly virus during a coronavirus test on all illegal immigrants from Bangladesh,” she said. “Fourteen people, including the Border Guard Force members and a driver who came in close contact with him [the infected individual], will be placed under a facility quarantine for observation.”

Nine Muslims including Mamat Taw Yup were reportedly detained recently by the local Border Guard Force’s No. 7 squad, and the illegal entrants were held in police custody at the Ngakhuya police station. The nine returnees were first tested for coronavirus at the Maungdaw District People’s Hospital on June 10, when Mamat Taw Yup’s infection was detected.

According to border guard figures, 18 illegal entrants have been arrested in Maungdaw District and charged under Section 13(1) of the Immigration Act, including one Bangladeshi national.

“Some village administrators and some clerks from the General Administration Department are reportedly smuggling illegal immigrants into Maungdaw Township. This needs to be addressed effectively,” said U Tun Hla Sein, a former Arakan State MP for Maungdaw Township’s Constituency No. 1.

“Village administrators were told in a meeting that action would be taken if they failed to provide immediate information on illegal immigration and smuggling. No action has been taken so far, but some information is available. After the investigation, effective action will be taken against those concerned,” said U Nay Oo, deputy commissioner of Maungdaw District.

More than a dozen people have tested positive for COVID-19 over recent weeks in Arakan State, according to the Arakan State Department of Public Health, with most of the cases coming from people aboard trading boats making calls to port in Sittwe.

Civil society organisations have urged authorities to suspend activities at border trade gates, and to pay heed to the health department’s precautions against coronavirus to prevent additional COVID-19 infections in Arakan State.

The Arakan State military council has said there is no plan to suspend border gate activities despite the past month’s COVID-19 cases, while noting that returnees are subject to quarantine procedures and are tested for the virus.

U Hla Thein, spokesperson and attorney-general for the Arakan State Administration Council, told DMG that quarantine centres in Sittwe have not been reopened for now, but an old Sittwe University building has been prepared for such a purpose if infection numbers rise to a level where it is deemed necessary.

There were 4,264 confirmed COVID-19 cases reported during the first and second waves of the virus in Arakan State, with 37 people dead.