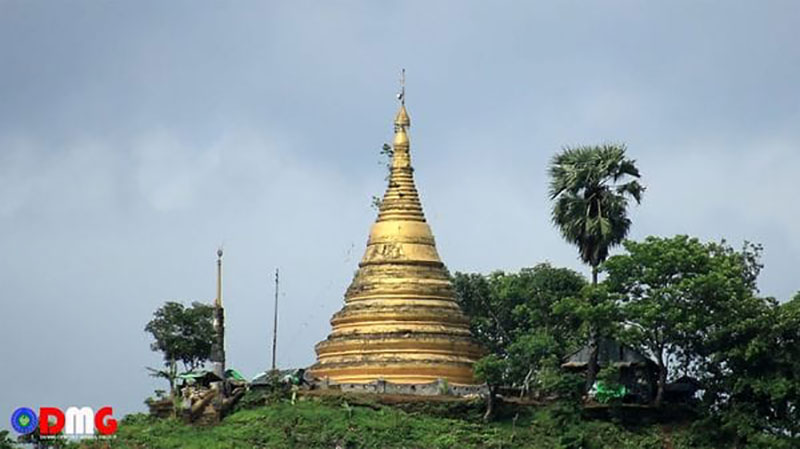 Locals in Arakan State say the Myanmar military (Tatmadaw) still has troops stationed at historical pagodas in the state, according to U Khaing Thukha, spokesperson for the Arakan Army and United League of Arakan (AA/ULA), who added that their presence at the pagodas violates the Geneva Conventions.

The Tatmadaw troops are stationed at historical pagodas in Mrauk-U and Minbya townships such as Thin Kyit Taw, Shwe Taung Cedi and Kyein Taung, locals say.

“The Myanmar military’s deployments on the sites of these ancient religious buildings, temples and pagodas is a clear violation of the Geneva Conventions,” the AA spokesman told DMG.

The Tatmadaw is stationed at the Kyeing Taung Pagoda in Minbya.

Members of the township Sangha association, local administration and social organisations went to the tactical commanding officer at Minbya military station to ask for three days of public worship on the full moon day of Thadingyut, also known as the Festival of Lights in Myanmar. They were only allowed one day, however, according to U Hla Thein Aung, a former Arakan State MP for Minbya Township.

“Monks, members of the pagoda’s board of trustees and ward administrators asked the Minbya military station chief for three days of public worship on the full moon day of Thadingyut, but they were only allowed one day. The locals were allowed to pay homage to the pagoda only for a limited time,” he told DMG.

U Hla Thein Aung demanded that the people be allowed to worship freely at the Kyein Taing Pagoda.

The Myanmar military has been stationed at the Kyein Taung Pagoda in Minbya since 2019.

The Tatmadaw has been stationed at Thin Kyit Taw Pagoda in Mrauk-U Township for more than two years, according to Ko Zaw Tun, a local resident.

“Since the beginning of the fighting, the Myanmar military has been stationed at the Thin Kyit Taw Pagoda, so no one dares to go there,” he told DMG, referring to the two-year conflict between the Tatmadaw and Arakan Army, which came to a halt with an informal ceasefire toward the end of 2020.

“I want the people to be allowed to visit the pagoda,” he added.

DMG attempted to contact Arakan State Security and Border Affairs Minister Colonel Kyaw Thura about allegations that the Myanmar military remains stationed at historical pagodas in the state, but he could not be reached.

Locals will be allowed to pay homage to the pagodas on the surrounding hills, Maj-Gen Htin Lin Oo, commander of the Tatmadaw’s Western Command, said at a meeting with internally displaced people (IDPs) from the Tin Nyo IDP camp on March 18 of this year.