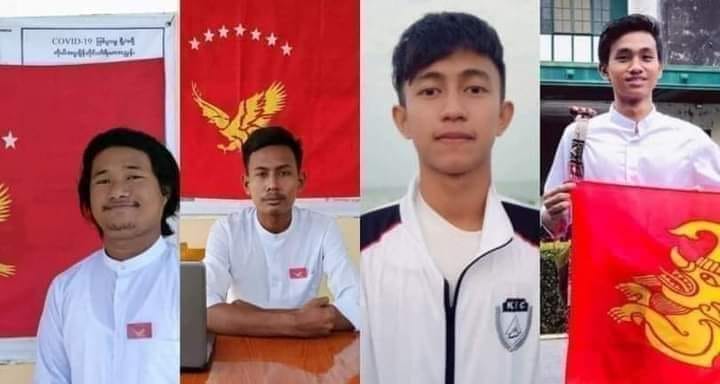 Four students in Arakan State who were released from prison this week after serving sentences for an October 2020 protest say they will continue to work for and give voice to the needs of the people.

The four Arakanese students were released from Sittwe Prison on March 11, said Ko Oo Than Naing, an information officer for Sittwe’s University of Computer Studies.

“Our release date was March 13, but we were released early on March 11 because the 13th is a Sunday. We are very happy to be released from prison. I would like to express special thanks to the students and people who have supported us,” he said.

The four were charged under Section 505(b) of the Penal Code and Section 29 of the Natural Disaster Management Law on October 19, 2020, for protesting against an internet access blackout in Arakan State and the conflict between the military and the Arakan Army at the time.

“We are proud and happy to stand up for the people,” said Ko Kyaw Naing Htay.

The students were given two years in prison for incitement under Section 505(b) of the Penal Code, and an additional six months under the Natural Disaster Management Law on September 16, 2021.

Ko Kyaw Naing Htay said he would continue to work for the Arakanese people.

“Due to the current political situation, we will reorganise the Arakan Students’ Union and build our strength. How far can we go for the Arakanese people and Arakanese students? We aim to move forward in consultation with students,” he added.
Twenty-one students from the All Burma Federation of Student Unions (ABFSU) were sentenced to prison under Sections 505(a) and (b) of the Penal Code, which cover incitement, for protesting against the internet blackout in Arakan State.