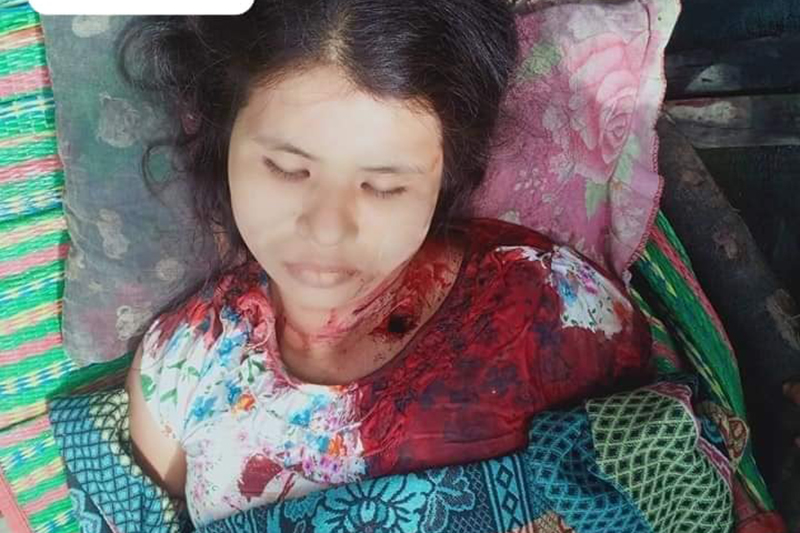 A woman was shot and killed near Yaw Chaung bridge in Myebon Township, Arakan State, according to the locals and State parliamentarians.

Locals said that while Daw U Khin Than, 32 and her husband U Maung Hla Aye were traveling by boat to Ywar Tharyar village from Wat Yu village in Myebon at around 9 a.m. on November 10 to sell fish, the Tatmadaw soldiers shot and killed Daw U Khin Than.

“We heard shots fired by the Tatmadaw on the way back from selling fish. The bullet went through the left side of Daw U Khin Than’s breast and came out the back,” Daw Khin Myo San, a resident of Wat Yu village said.

U Maung Hla Aye received a thigh injury from a gunshot, and the corpse of his wife was brought to Myebon town by boat.

U Pe Than, a member of Pyithu Hluttaw for Myebon township, said what he learned from the locals that the Tatmadaw unit shot the couple from the jetty at Ywar Thayar village.

“If the Tatmadaw soldiers arrive at a village, they normally block the road for security reasons, but this situation happened during daytime. If they wanted, they could stop the boat and question the people,” he said.

Regarding the case, DMG asked Colonel Win Zaw Oo from the Western Commend, he said that he hasn’t received news about it yet.

“I haven’t heard any news yet, if I do I’ll let you know,” Colonel Win Zaw Oo said.

The deceased Daw U Khin Than has a one-year-old daughter and was pregnant when she was shot and killed.