‘The NCA is like a stroke patient; can’t move at all, but not dead yet’ 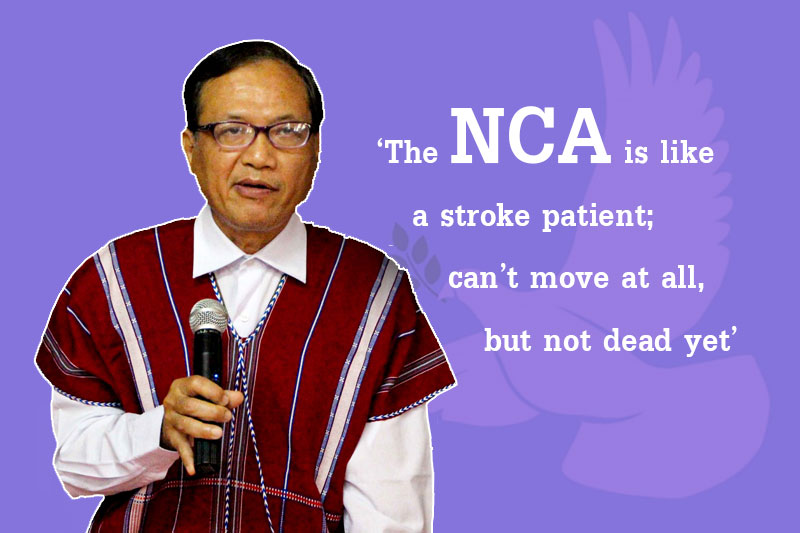 The government and 10 ethnic armed organisations (EAOs) signed the Nationwide Ceasefire Agreement (NCA) to find a permanent solution to armed conflict in Myanmar’s politics through official political dialogue. However, the NCA process has stalled due to ongoing fighting between some NCA signatories and junta forces, the latter described as such since the military’s February 1 coup.

Amid the post-coup confusion, DMG interviewed Padoh Saw Taw Nee, head of the Foreign Affairs Department of the Karen National Union (KNU), one of the most powerful NCA signatories, even as the accord increasingly looks like an historical document of waning relevance.

DMG: The regime council recently said it would take security action if there is violation of the NCA. What do you think about it?

According to the current situation, we have problems continuously implementing the NCA, especially the regime council that does not follow the NCA. It does not want to implement it. It breaches fundamental principles as well as does not follow any provisions contained in all seven chapters of the NCA. We cannot listen when it talks about the NCA this time as it has done what it wants to do during the peacemaking process. We have faced many experiences of what they did. As it staged the coup, the NCA is completely useless and there is no reason it can work.

We have already decided that we need to seek better ways to address the political situation in this country. So, I keep telling media agencies that the NCA is like a stroke patient; he/she can’t move at all, but they have not died yet.

DMG: Why do the people and the remaining [non-signatory] ethnic armed groups lack trust in the NCA?

PSTN: I keep talking about the lack of trust. If a contract that is signed by both sides or with a lot of people cannot be implemented as it is written, there are many ways that [trust in the agreement] could be damaged. That situation happens not only with the NCA, but with any contract. So, it is not unusual when the organisations that have not signed the NCA are not interested in the NCA. It is natural.

DMG:  What are the reasons for violating the NCA?

PSTN: The provisions in Chapter 3 and Chapter 4 are to make the ceasefire strong. Both sides need to meet for the sites to cease fire and troops deployment. But we cannot implement it after the NCA is signed in 2015. Especially, we tried to meet but they [the military] did not accept the meeting. But they forcibly enter into the territory of Brigade 3 and 5 of KNU, saying they are going to build a road. So, we cannot sit and watch them; we have rights to conduct self-defence.

When we couldn’t stand to watch the invaders, the level of self-defence rises. If they hadn’t come into our territory, nothing would have happened. These are the reasons for breaching the NCA. If they want to build roads, there are a lot of roads to build in Myanmar.

DMG: Some say the NCA is nullified. And, you said that another path will have to be used to go to peace, instead of the NCA. What will these options be?

PSTN: We cannot accept the current military coup and brutal solution, according to our policy. Therefore, we issued a statement on February 2, after the coup on February 1. Then, on March 24, our chairman sent a letter to [Senior General] Min Aung Hlaing. We explicitly demanded that the military step back from its involvement in politics, and to declare a federal democracy.

A letter was issued on June 30. And, statements were also issued on the sixth anniversary of the NCA. All the statements didn’t accept the military dictatorship or military coup. We will join with all those who are against it. If they are in trouble, we will help them. The people, who are fleeing from their area [in Myanmar], reach our territory when they face a situation where they will be killed by the troops of Min Aung Hlaing as a consequence of the coup. Thousands of people have fled to our territory. We help them and work with them.

DMG: Can I ask if there will be a continued rupture of the NCA for security reasons in the case of Lay Kay Kaw [fighting in Kayin State]?

PSTN: In the case of Lay Kay Kaw, we do our best to help those in need, from a humanitarian perspective. When this happens, the people who come here are not ordinary people. It’s just people who oppose the military dictatorship. Their feelings are negative because they are fleeing like dogs and pigs. They want to fight back.

So, we didn’t give anything, but taught them skills to defend themselves. So, they make problems with us. And, they checked people in Lay Kay Kaw. It is our territory. Though we cannot control it completely, they are our members. This area is under KNU control.

But we want to keep the peace. Lay Kay Kaw was built as a peace city. Thus, we tolerated their checks. But their checks have been seven and eight times, and they entered with large numbers of troops the last time. They searched and arrested the people we protect in our territory. They destroyed houses. So, we cannot stand by anymore, and have fought back. So, there are clashes there every day.

DMG: What do you want to add about the NCA?

PSTN: We did our best for the NCA. The KNU was patient to be peaceful for the peace process. We tolerated [grievances], though the military deceived and bullied us. Finally, the regime council makes us involved in the war. So, we don’t want to say now whether the NCA is nullified or not. This is a game we must play. The people stand by us. There is nothing to worry about because all people stand by us.