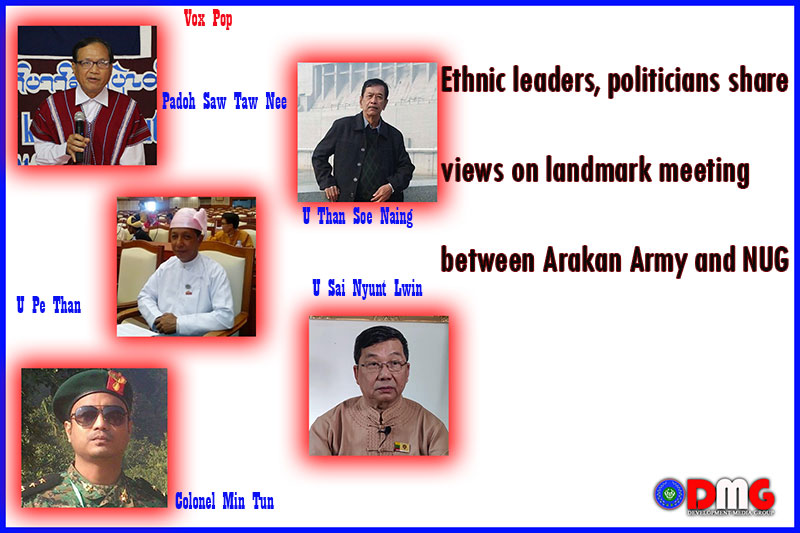 Leaders of Myanmar’s opposition National Unity Government (NUG) and the United League of Arakan/Arakan Army (ULA/AA) met for the first time this month, holding a two-hour virtual meeting on May 16.

The AA recently said it would not attend peace talks invited by junta leader Min Aung Hlaing. The AA’s meeting with the NUG came one day after the ethnic armed group released a statement warning that military tensions are running high in Arakan State because the regime has been disrupting its administrative and judicial functions, and its efforts to create harmony between the Arakanese and Muslim communities. Some leaders of ethnic armed organisations (EAOs), veteran politicians and political analysts shared their views about this month’s meeting between the AA and the NUG.

We welcome the meeting. It is the first official meeting between the two sides. And we are glad that they talked. We, the KNU, are also working to end the military dictatorship. Needless to say, we should be aware of and speak out when faced with injustice in the country.

There will always be challenges in fighting against injustice. We can no longer put up with the regime exploiting the country and oppressing the people.

We had been actively involved in the peace process, but ultimately [the military] used force and seized power. Fresh clashes broke out as we couldn’t stand for it. We are more than happy if every revolutionary group will firmly stand by what is right. But I acknowledge that every group has its own policies, and they will act accordingly.

We can’t accept [the regime’s] proposal for peace talks after they have done so many unjust things as they please. If [EAOs] stand by the people, a turning point will surely arise in Myanmar’s revolution [against military rule].

We don’t know how many agreements they reached at the meeting. As it was their first meeting, the NUG might have been looking to persuade the AA to join its government. The NUG has long wanted to meet the AA, and it referred to the AA as the Arakan State government, the ‘Arakan People’s Authority’, in its press release about the meeting.

So, they recognise the AA’s existence, and the NUG’s choice of words gives the AA political advantage. At the same time, the AA met the NUG and refused to meet the regime. So, it can be interpreted as the AA recognising the NUG. The NUG also might want to have the AA’s recognition. So, the meeting was beneficial to both sides. However, it is difficult to say to what extent it will benefit both sides, and we can’t expect much from their meeting. We have to wait and see how the NUG will proceed.

In general, I think it’s good for the NUG and ULA to hold talks like this. In any case, the problem in Myanmar is the issue of national equality for the ethnic nationalities and the issue of democracy and human rights for the ordinary Burmese people. In this case, the two approaches can be said to be different, but at the same time, they can be said to be the same. Because going with federalism alone is not complete without democracy, and going with democracy alone is not complete without federalism. That is why it is good that the ethnic armed groups and the pro-democracy forces are working together to overthrow the military dictatorship.

However, it is difficult to say for sure what will happen when the exact details of what the NUG and ULA discussed were not made public. The ULA has also said that fighting could break out in Arakan State. But these battles may not be related to the Spring Revolution.

We welcome the discussions between the Arakan Army and NUG. But I cannot comment because I do not know exactly what was discussed. It is good that we are discussing this as an alliance in the Spring Revolution. That’s all that I can say about the talks between the NUG and the Arakan Army.

I would like to say that if the NUG meets with the Arakan Army and implements this scenario, it will be happy for the people to defeat the military dictatorship. The military junta will try its best not to have a front in Arakan State. However, given the basic attitude of the military junta, the potential for conflict with the ethnic armed group is inevitable.