Monk on a Mission in Mrauk-U and Beyond 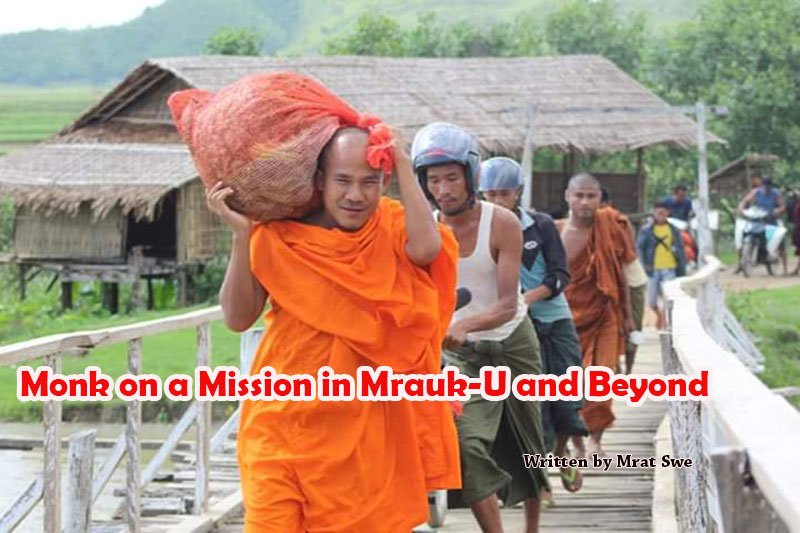 A Buddhist monk finds plenty to be done inside the Mratazaung camp for internally displaced people (IDPs) and an affiliated monastic education school near Shit Thaung Temple in Mrauk-U, the ancient abode of Arakanese kings .

The monk, Mratazaung Sayadaw Venerable U Nandarthara, is busy educating youths at the camp, whose futures are uncertain in the face of the adversity brought about by displacement. The IDPs were uprooted by previous clashes between the Arakan Army (AA) and the Myanmar military in Arakan State.

The monk is the fourth son of U Aye Kyaw Phru and Daw Soe Yin Nu from Fadu Chay village on Phadu Island, Pauktaw Township. Growing up in poverty, he could not afford to go to government schools as a child. The name given to him by his parents is Maung Aye Twan Maung.

The monk traveled to Sittwe, Yangon and elsewhere to study religious literature, and returned to Arakan State in 2007 following the Saffron Revolution against Myanmar’s military regime of the time. From then on, the monk began working with others to provide free education to children who were poor and could not otherwise get an education. Along with another Buddhist monk, Mratanzaung Sayadaw Venerable U Nandarthara worked as a schoolteacher for the Myoma Monastery in Rathedaung, teaching more than 20 monks in 2008-09.

“In 2010, when I was living in Yadanar Manaung Monastery, I had to send guests to pay homage to the Buddha on the orders of the abbot. As I was escorting the guests to the pagoda, I saw children begging. The Mratanzaung monastic education school was established in 2011 with the aim of educating children,” the Sayadaw explained.

He also got political in 2016, calling for an end to fighting in Arakan State as clashes broke out that year between the Arakan Army (AA) and the Myanmar military, leaving many wounded and displacing thousands of local people.

The Sayadaw was sentenced to two years in prison on April 10, 2017, when a court found him guilty of violating Section 17 of the Unlawful Associations Act for hosting a football tournament that was billed as the Arakan Army Cup, held to coincide with the eighth anniversary of the ethnic armed group’s founding.

“I was sentenced to years in prison. I was released after I spent more than a year in prison. Then, in 2019, when the fighting between the Myanmar military and Arakan Army resumed, I helped the displaced people in Arakan State,” the monk recalled.

The Sayadaw helped establish seven IDP camps in Arakan State — Mratazaung, Tinnyo and Sinbawkaing in Mrauk-U Township, Wah Taung in Minbya Township, and Kaigyi, Yet Chaung and Sanyin Chaung in Myebon Township — in 2019.

“I am currently working on relief, education and assistance for political prisoners. I do two kinds of rescue work: I provide assistance in the displacement camps, and emergency assistance to those in need. I last visited the village of Saukhat in Rathedaung Township. Since the Myanmar military was stationed in the village, we went there to rescue the stranded villagers,” the Sayadaw said. 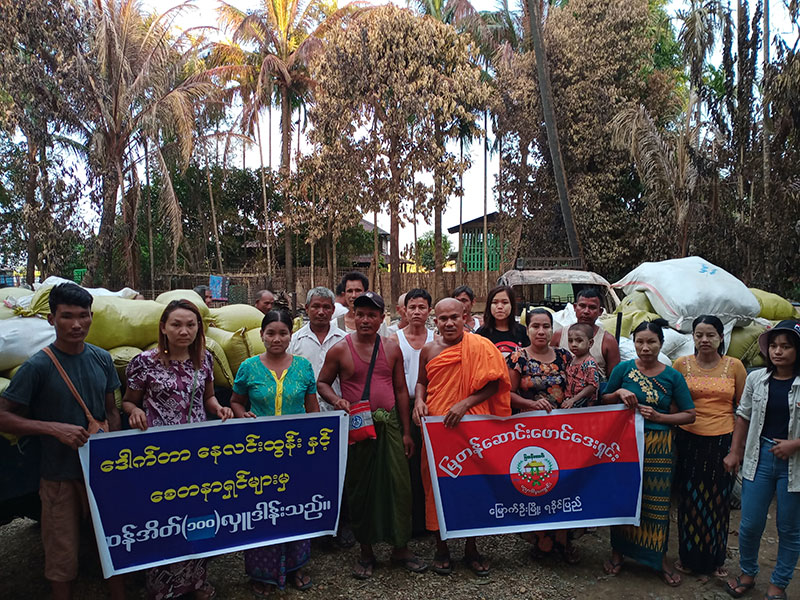 At present, the monk is in charge of the Mratazaung, Sinbawkaing, Wah Taung, Sanyin and Kaigyi IDP camps. There has been no fighting between the Myanmar military and Arakan Army in Arakan State for more than a year, and many displaced people from the five camps supervised by the monk have returned to their homes, but more than 10,000 have not been able to, according to the Sayadaw.

Four of the displacement camps he oversees are currently adequately provisioned, but Sanyin IDP camp in Myebon Township, which is not officially recognised by the government, has frequently faced supply shortages and shelter problems.

The Buddhist monk says he thinks often about how and when to send the IDPs back to their homes. Any large-scale return will require that the IDPs be provided with the necessities of life before sending them on their way, he acknowledges.

Until then, the Sayadaw is provisioning them with knowledge. The monk is currently providing basic education literature classes from kindergarten through 10th grade, and teaching computer and English courses to children over 8th grade, at the Mratazaung monastic education school.

The Sayadaw has opened computer and English-language training schools in Mrauk-U, Pauktaw and Kyaukphyu townships, and has plans to open such schools in additional townships. The Sayadaw has struggled to buy computers for the students, and finding teachers for the English courses has also been difficult.

U Aung Khin, a Muslim instructor, arrived last year at the Mratazaung monastic education school to teach English to the children. Speaking to DMG in November, he described the Sayadaw as “a very good-natured and loving monk connecting the two main ethnic groups in Arakan State, Arakanese and Muslim.”

The Sayadaw said the main purpose of teaching the impoverished and underprivileged young people in the displacement camps is to educate those who could not otherwise get a proper education. The Sayadaw says he will carry on with philanthropic activities and charitable works for the benefit of those in Arakan State’s rural areas who continue to face humanitarian needs.