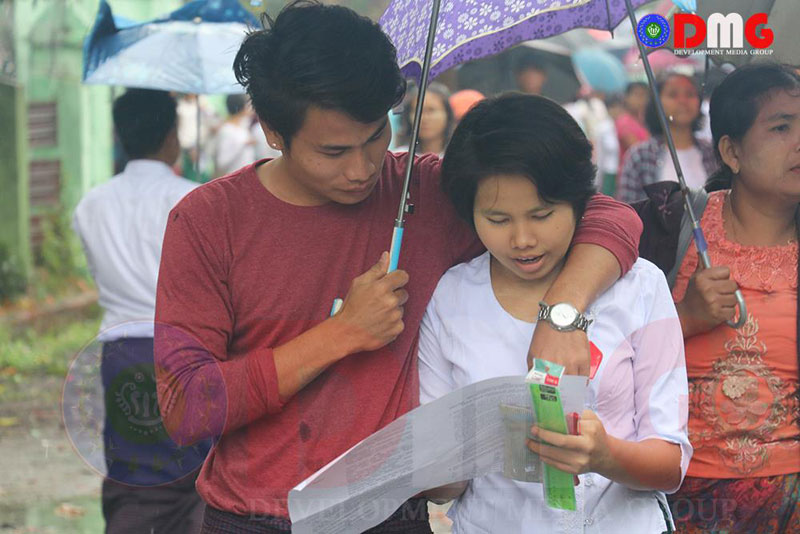 Educators and MPs are asking armed groups to stop fighting during upcoming matriculation exams so that students preparing for the tests can focus on their studies.

Daw Khin Saw Wai, a Pyithu Hluttaw lawmaker from Rathedaung Township, noted that matriculation exams are a high-stakes affair in Myanmar, and expressed concern that ongoing hostilities could disturb students.

“Exams will start on March 11. It is getting closer. If the clashes happen, students could be sad and distressed while they are trying to focus on their studies,” she said.

U Tun Aung Thein, a state MP (member of parliament) from Buthidaung Township, also urged warring parties to stop fighting during the exam period out of consideration for students and their parents.

“Armed groups should stop launching attacks until the exams finish,” he said.

U Aung Kyaw Sein, the principal at Pan Myaung High School in Minbya Township, said that students have invested time, effort and money during the academic year to prepare for the exams, and so deserved to be able to take the tests without any disturbances.

“I am very concerned about my students. I wish both groups would stay quiet during the exam period. It is best not to have any fighting,” he said.

Twenty exam centers in Minbya, Kyauktaw, Myebon, Ann, Ponnagyun, Mrauk-U, Kyaukphyu, Rathedaung and Buthidaung townships will be moved to safer locations due to security concerns, according to the State Education Office.

The matriculation exam for the 2019-20 academic year is set to be held across the country from March 11 to 20. A total of 49,002 students are registered to sit the exams at 107 locations in Arakan State.

ashes between the Tatmadaw and Arakan Army began in Arakan State in December 2018, resulting in more than 100,000 war refugees and scores of civilian casualties, including schoolchildren. Most recently, 21 students were injured when an artillery shell hit a school in Buthidaung Township’s Khami Chaung village on February 13.