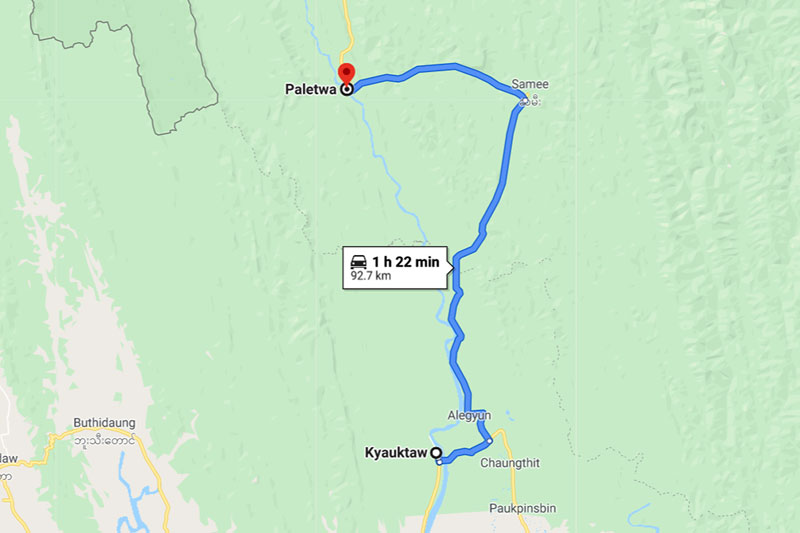 A passenger boat travelling to Kyauktaw from Paletwa in Chin State was fired upon at around 12:30 p.m. on February 27 and four people aboard the vessel were injured, according to passengers on the boat.

Five passenger boats left Paletwa town together, southbound to Kyauktaw town in Arakan State, when gunfire targeted one of them. The attack injured three men and one woman.

“We were shot as soon as our boats arrived at Tinma village. Shots were fired continuously for more than 30 minutes, until we left that village,” a passenger, Ma Hnin Hnin, told DMG.

The injured are U Ko Ko Maung from Sittwe, boat driver U Min Aye Thein, a boat assistant, and Ma Khin Mar from Paletwa.

“All four injured are from one boat. A bullet went through the leg of the boat driver. His injury was the most serious compared with the others. Their wounds were wrapped up with bandages at the scene,” Ma Hnin Hnin said.

There were around 80 passengers aboard the five boats that set off from Paletwa together. The Tatmadaw stopped all the boats near Kyauktaw town and questioned them for about three hours.

An anonymous passenger said that the Tatmadaw detained Arakan Youth Conference representative Ko Kyaw Hla and a man from Buthidaung Township, who were on one of the boats, after questioning.

Passengers said that the injured people also were being questioned while receiving treatment at Kyauktaw Hospital.

The spokesperson for the Arakan Army (AA) and residents said that high-intensity clashes between the Tatmadaw and the AA have been going on northeast of Tinma village in Kyauktaw Township, with the Tatmadaw launching aerial assaults using helicopters and fighter jets during the fighting.