About 500 people from Rathedaung flee to Arakan State capital 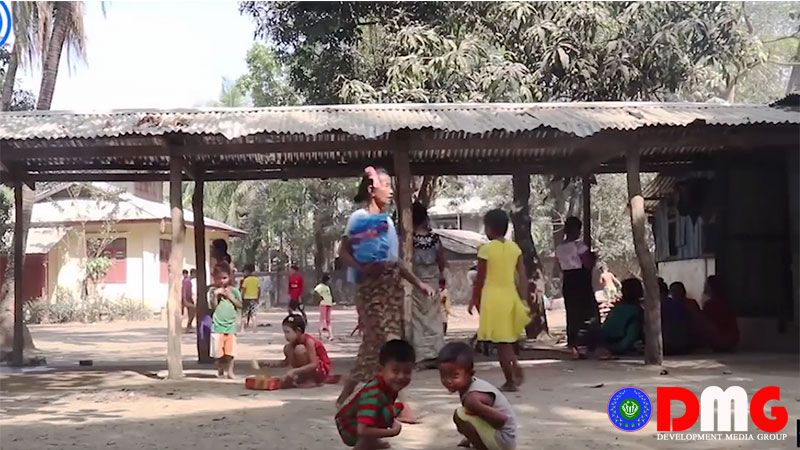 As residents of Arakan State townships where fighting has been occurring between the Tatmadaw and the Arakan Army (AA) have continued to flee to safer locations, around 500 people from Rathedaung Township recently arrived in Sittwe seeking shelter.

The internally displaced people (IDPs) from Rathedaung said that clashes near their villages threatened lives and so they decided to flee to the Arakan State capital.

“Fighting happened very often around our village. An artillery shell landed in the village and its blast hit people and damaged houses. That’s why we came here; because we are concerned about our lives,” said U Maung Thein Tun, a resident of Amyat Taung village in Rathedaung Township.

IDPs from Kyauk Yan, Thazi, Amyat Taung, Nga Sanbaw, Yay Bote, Aung Myay Khone, Oak Pho and Htee See villages form the latest cohort of displaced in Sittwe, arriving there from their home villages since March 5. They are currently sheltering at Alodawpyi and Mani Yadanar monasteries in the state capital.

On March 12, the state government provided 98 rice bags and the Myanmar Red Cross Society supplied blankets and mosquito nets to more than 340 IDPs sheltering at Mani Yadanar monastery, according to IDPs.

“Food, clothing and healthcare support are the most important for us here. We need them,” IDP Ma Khin Than Win said.

Fighting between the Tatmadaw and the Arakan Army (AA) has endured for more than a year and the conflict zone has widened significantly since its nascent days. The civilian casualty count and IDP populations have grown commensurately.

“Civilians are now in trouble. We aren’t involved in the conflict but a lot of people have been killed,” said Daw Khin Khin Nyunt, who fled her home in Aung Myay Khone village in Rathedaung Township. “We want peace. We just want to stay at our own house in our village with our children.”

According to the Arakan Students Union (Universities – Yangon), more than 130 civilians have been killed and over 360 injured due to the conflict in Arakan State.

Up to 130,000 people in the state have been forced to flee their homes and many now face difficulties accessing basic necessities such as food, shelter and clothing, as well as healthcare and education.