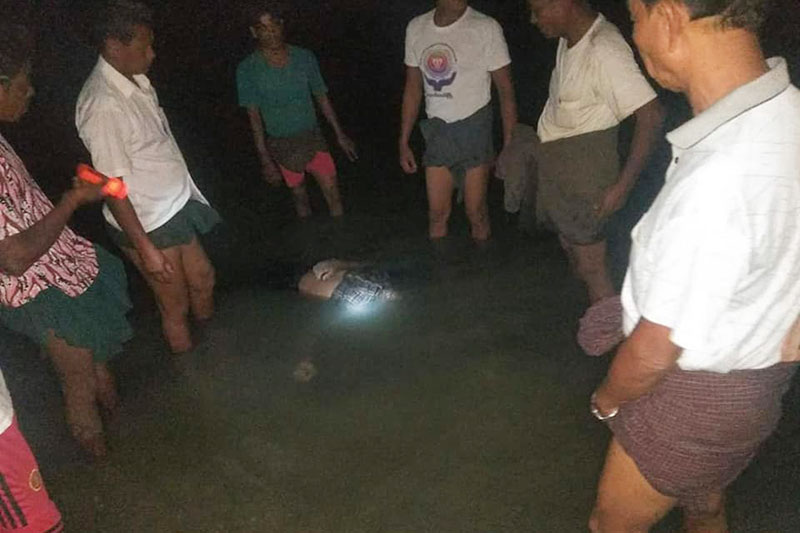 Three bodies were found with gunshot wounds in Kyauktaw Township, Arakan State, on April 17 and 18, according to local residents, in the days after several civilians were wounded in a shooting incident in Kyauktaw town that also took the life of a 14-year-old boy.

The three, all men from Kyauktaw’s Myothit ward, were identified as Mg Myat Thu Maung, 19, U Bo Naing Win, 32, and U Kyaw Kyaw Naing, 47. Their bodies were taken to the mortuary in Kyauktaw town.

Family members said the men went missing after they left for Latmadaw ward on April 16, around the time that gunfire broke out in the town.

“They were selling beef in Lanmadaw ward,” said Ko Nyi Naing Win, the younger brother of U Bo Naing Win. “They left home with cows and were shot dead when they met with military troops on their way.”

DMG sought comment from military spokesmen for the Tatmadaw True News Information Team and the Western Command regarding the accusations leveled against soldiers in the area, but Brig-Gen Zaw Min Tun and Colonel Win Zaw Oo could not be reached.

The three bodies were discovered in different locations and there were signs of torture, family members said.

“U Kyaw Kyaw Naing had bullet injuries in his side. All his upper teeth were gone,” said Ko Nyi Naing Win. “Mg Myat Thu Maung had a gunshot to his temple. U Bo Naing Win was found with a bullet wound through the back of his head.”

U Bo Naing Win’s corpse was found in the Kaladan River near Thawinkaing village, Kyauktaw Township, on the night of April 17.

The body of U Kyaw Kyaw Naing was found on the riverbank near Shan Ywar village and Mg Myat Thu Maung’s was found near Ponena village on the morning of April 18.

“It’s fine that they [the Tatmadaw and Arakan Army] fight each other, but civilians have been killed without reason,” Ko Nyi Naing Win said.

A 14-year-old boy who was among six civilians injured by the gunfire in Kyauktaw town on April 16 was pronounced dead at Kyauktaw Hospital hours after the shooting on Thursday evening.

In a statement, the Office of the Commander-in-Chief said the Arakan Army (AA) attacked Tatmadaw troops conducting regional security operations using a remotely detonated mine set along the road leading to the Kispanadi Bridge, about 500 meters south of Kyauktaw town. After the explosive was triggered, members of the AA deployed at the highway bus station about 200 meters southwest of the bridge and opened fire on the Tatmadaw troops, forcing them to return fire, the statement said.

Mg Zin Ko, who was injured during the shooting and is receiving treatment at Sittwe General Hospital, said the gunfire came from Tatmadaw troops at the Kyauktaw highway bus station, adding that he was shot while riding a motorcycle with two others in the vicinity who escaped the incident unharmed.

“We were doing construction works. We got yelled at from behind while we arrived near the Kyauktaw agriculture office. Then we were shot. I saw the soldiers from a group stationed there when I got into the ambulance. It was fired from the bus station,” he said.

Civilian casualties continue to rise in Arakan State due to the Tatmadaw-AA conflict. Lawmakers in the state and CSOs have asked the warring parties not to engage in hostilities near residential areas and other places trafficked by civilians.