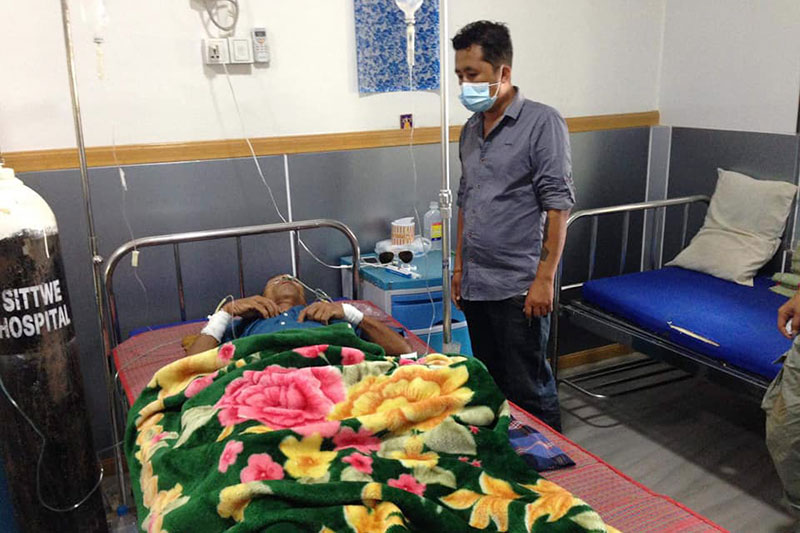 A civilian from May Lwan village in Arakan State’s Minbya Township was shot dead by the Tatmadaw on April 21, the victim’s father U Kyaw Hla Oo told DMG.

Identified as U Kyaw Win Chay aka Kyaw Win, the 31-year-old man was shot and killed near May Lwan village at about 10:30 a.m. as he was returning home from fishing at the Ma Ni Chaung Bridge, a mile from his village, U Kyaw Hla Oo said.

“My son encountered a Tatmadaw column that was marching from the pagoda. The Tatmadaw shot him while he was hesitating about whether to keep going or not. My wife also saw the shooting,” he said.

Residents said that same day Tatmadaw troops entered the village opening fire even though there were not any clashes in May Lwan village, with soldiers also questioning some villagers about the Arakan Army.

In a statement, the Tatmadaw identified the deceased as U Maung Kyaw Kyaw Win, son of U Kyaw Hla Oo. However, U Kyaw Hla Oo said his son’s real name was U Kyaw Win Chay.

The statement said Tatmadaw troops conducting security operations in the village saw a man driving a motorcycle and ordered him to stop for inspection because they suspected him. However, he did not yield and a member of the military contingent opened fire to scare him, according to the statement. It added that the man then stopped the motorcycle and fled in the direction of Taung Bote Kay village, prompting the security guard to fire another shot.

Security forces subsequently conducted a sweep of the area and the man was found dead along with a Chinese-made grenade and a knife in the toolbox of a motorcycle near him, the statement said.

The villager worked in the mining industry in Kachin State for about 13 years and had only returned to May Lwan about six months ago, the Tatmadaw statement said. It attributed that information to his father and claimed that U Kyaw Hla Oo said his son was affiliated with the Arakan Army.

Speaking to DMG, U Kyaw Hla Oo confirmed that he told the Tatmadaw his son had returned from Kachin State, but did not say anything about U Kyaw Win Chay having ties to the Arakan Army.

“My son cannot drive a motorcycle and we don’t even have a motorcycle. He has no contacts with the AA either. He is working with me collecting palm leaves for a living,” said U Kyaw Hla Oo.
Amid Tuesday’s gunfire in May Lwan village, 73-year-old U Kyaw Khaing, who was eating at his home, was hit by a bullet in his stomach and admitted to Sittwe General Hospital, according to his nephew Ko Win Naing.

DMG has learned that four civilians including a World Health Organization staffer were shot dead and nine civilians were injured by gunfire from April 20-21 in Minbya Township.